Dragons don’t live in regular houses so for a play-of-the-day, kids can get out the blocks or Lego and build a dragon castle for some construction play. 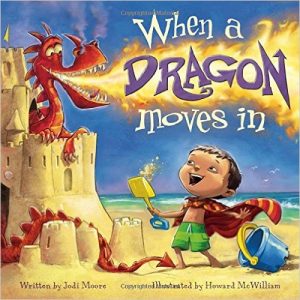 This activity has been inspired by the children’s book, When A Dragon Moves In, written by Jodi Moore and illustrated by Howard McWilliam. According to the little boy telling the story, “If you build a perfect sand castle, a dragon will move in.” The boy builds a marvelous castle and the dragon does come. Unfortunately, the dragon is invisible to everyone else in the family. When a number of not-so-good things happen, the boy gets in trouble. He finally has to ask the dragon to move out and learn some manners. But the next day…

Of course, this isn’t exactly the season for going to a beach and building a sand castle. Instead of sand, how about building a castle with blocks of some sort? The blocks could be wooden, cardboard ones, foam, plastic, or even sponge. Duplo and Lego are great for making castles too. Maybe a dragon will still move in. 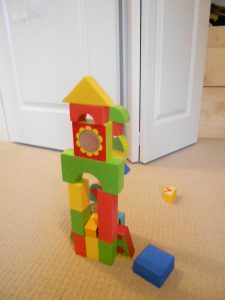 When we watch kids, construction play is already pretty active on the outside. Kids are stacking blocks on top of each other, setting them in rows, and arranging them in just the right way. Usually this happens on the floor and kids are moving up, down, and around. They are reaching, balancing, carrying, stretching and more as they play. With small blocks like Lego, the muscles in the fingers, hands, and wrists are making countless small movements.

On the inside, kids are very busy too. Brains are active with many different thinking skills. One of these is obviously problem-solving. Sometimes a block won’t balance on another one. Kids have to figure out not just why but how to fix the problem. Some won’t fit in a space. The block might be too big, too small, or the wrong shape. Kids are also linking cause and effect. Often kids build a tower of blocks only to push it over. They need to test if it will always happen and if it happens in the same way each time. Decision-making and planning are other brain strategies happening. 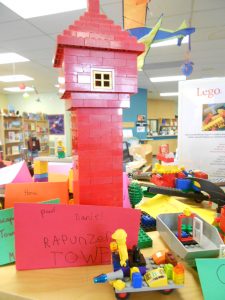 Of course, kids are also imagining and creating. This might be a castle for a dragon or for a different creature. Inside the castle there might be a treasure. Is the dragon guarding it or trying to steal it? During play, kids will be creating a castle as well as imagining the story that goes with it. Build a dragon castle construction play also builds brain skills.

Sometimes, when children build with blocks, they are no sooner done than they knock it over. To them, deconstruction is part of the process. The product hasn’t been as important as the building. Other times, families may have to walk around whatever it is for days or risk dragon-sized tears if we happen to topple what they’ve made.

Whatever happens to the castle after play, the best part of it is the blocks can be used to build a dragon castle again another day. And it doesn’t have to be perfect!