Counting dragon treasure doesn’t need to take long, unless you’re a dragon. But even if kids only spend a few minutes, that adds to the experience pile. And tonight on tv we’ve certainly watched the drama of counting and numbers. 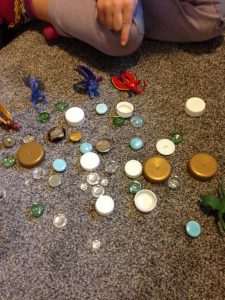 Dragons collect all sorts of treasures. Since they are imaginary creatures that could be practically anything. Maybe they like buttons, marbles, or cars. Some dragons may look for bottle caps or beads. A nature dragon spend his time counting rocks. After all wizards, magicians, and witches might have turned real jewels into rocks. Kids can probably suggest other items for dragon treasure. Little Sister got out her treasure box that had buttons, rocks, and some plastic crystals from an old dining room light.

Round up a dozen or so things and let kids count them. At first, the counting won’t be accurate but learning to count is a process. What’s more important is that kids are figuring out one number goes with one object. This takes lots of experiences with counting. If kids have a pretty good idea of the numbers, they can choose to be a number dragon. For instance, the 4-dragon likes his treasure to be in piles of 4.  As kids create piles of 4, they are developing an idea of 4-ness. This happens for other numbers too. How many pieces of treasure would a 3-dragon want? That’s right, she would want piles of 3 things.

Little Sister tried to count the items in her treasure box and carefully pointed to each one as she said the number. However, she missed some and then couldn’t remember which ones she’d counted. I showed her she could pick up one treasure at a time and put it in the lid. This was better and much easier. 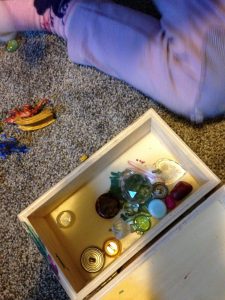 Kids absolutely need to play and have fun with numbers. This helps them become familiar and confident about their own number skills. One in four people suffer from math anxiety. How comfortable are you with numbers? The best way for kids to be comfortable is if they have countless play experiences. Pun intended. Think of play activities with numbers and counting as brain treasure. Dragons don’t get treasure all at once. They get a bit at a time and it grows into a huge pile. That works for kids too. Little play opportunities grow into big learning. Can counting dragon treasure be part of your kid-dragon’s fun today?