March Fourth sounds just like March Forth–what a fun play on words; for kids words build brain power. We might think words and action are opposites but brain-wise, the activity of words in the brain is mighty. 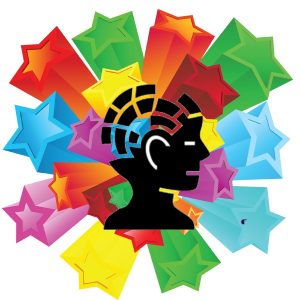 Some fascinating research counted the number of words young children hear in a year. This, of course, varies depending on how much word activity there is in a family but the range is from over 3 million to 10 million. That’s per year! By the time a child is 4 years old and soon ready to start kindergarten, that total has now expanded to between 10 and 40 million words.

No matter what the language is, the brain needs words. They help create pathways and connections in the brain. Just think how much information the brain receives in the form of words. The more words kids hear, the faster they process that information.

Let’s look at those numbers again: 10 million words or 40 million. That’s a gap of 30 million words and it makes a similar gap in brain power. Have you ever heard the expression to “steal a march on someone?” It means to gain an advantage over somebody else. The kids who hear the 40 million words steal a march on those who only hear 10 million. Once kids get to school, we can see this in the simple act of putting a hand up to answer a teacher’s question. Do you remember kids who always seemed to get their hands up first? They may not have been smarter than other kids but their brains were faster at processing language. If we compare brains to car engines, these engines were not necessarily bigger but they sure were turbocharged. And that’s the power of words. 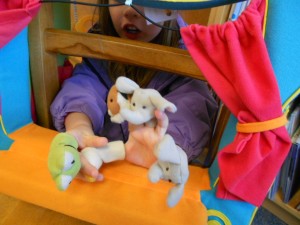 Some practical ways to include words in your child’s day are to: read books, make up stories to tell, have conversations, and play. Puppets will use words, but so can other toys. Pick up a toy car and be it’s voice, “Oh, I am going so fast. I can zoom on the floor and go over the slippers. Ooops, I better be careful I don’t fall in. Oh, oh, it’s so dark in here. Now which way? Help, help.” Talk outloud during ordinary everyday actions such as getting dressed. For example, if your child’s pants are red, name other things that are red too, like stop signs, cherries, and traffic lights.