For a magical play formula we discovered a new one: shovel dirt fairy rocks fun. Big Brother loved it. For fairy rocks, we used small flat glass marbles. The dirt was in a big flower bed and the shovel shared the play with a few diggers and dump trucks. 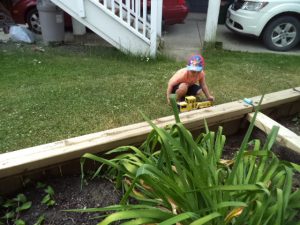 The glass marbles are shiny and sparkly, sort of like fairy dust. They can be found very inexpensively in craft and dollar stores but other small items can be used too. These are about the size of a hard candy so make sure kids are past the stage of putting things in their mouth. We made sure Baby Brother couldn’t get them by only playing with them outside. We put them in the dirt in the planter and one of the toy vehicles covered them up. Then, Big Brother used the digger or a shovel to find them. 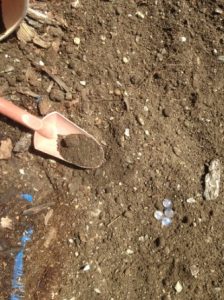 I thought the white fairy rocks would be easier to see against the dirt, but they are more clear than white so they just blended in. They were almost impossible to find in the dirt. The green ones were more visible but it’s surprising how far away they can get from where they are initially buried. Big Brother buried and dug them for the longest time. Each time he would announce, “I find it. I got the fairy rock.” Then, he would do it again. Only once did a fairy rock disappear and need to be replaced with another. At some point, it will turn up because this is one of his favorite places to play. 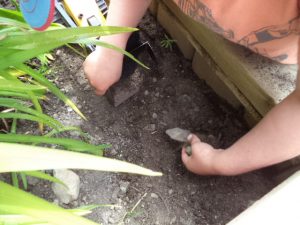 Kids engage in all sorts of repetitive play. One reason is because they are exploring cause and effect. We know what the most likely outcome will be because of the number of times we have experienced something. Kids are just building this data base of experience. 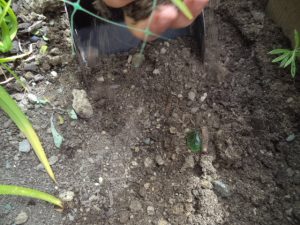 This shovel dirt fairy rocks fun was a great child-directed play activity. Are there some items your child can use to bury, dig, and find in the dirt?

Fly on in tomorrow for some more fairy and elf activities on the blog.