We’ve done lots of outside activities for fairies and elves so this afternoon we did a fairy craft of fairies and other creatures at night in the forest. 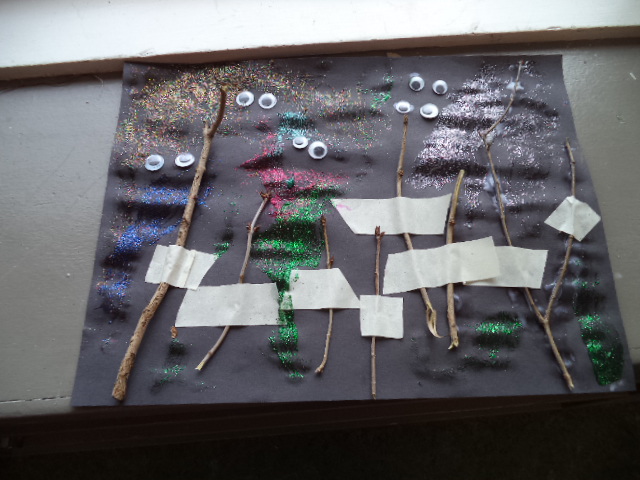 To start, we used a piece of black construction paper to look like night. We went outside and got a few small twigs from some bushes along the sidewalk. We brought these back in and Little Sister arranged them on the paper to look like trees in the forest. Using a small paintbrush, she spread white glue on one of the twigs and pressed it onto the paper. While the glue is still wet, the twigs do wiggle around. 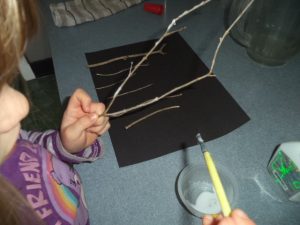 The first twig stuck down a bit, but Little Sister didn’t like the glue all over the paper. She wanted tape instead. In the kitchen drawer there is clear tape but for some reason her choice was the roll of masking tape. She didn’t seem to mind that it wasn’t transparent and cut off pieces to stick down the twigs. 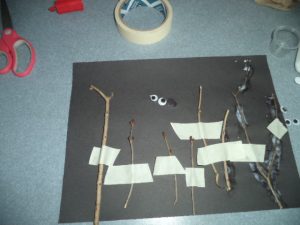 Next, came the googly eyes. A little dab of glue on the back, and these stared out from the night. 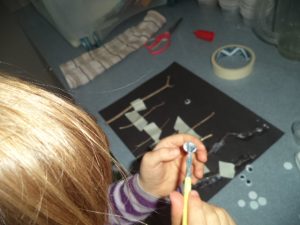 Fairies have fairy dust. Glitter makes fairy dust and a mess all over the house. Whoever invented glitter glue must have had kids. When Little Sister squeezed the glitter glue, it came out in globs so she spread it around with the paint brush. She needed to use every single color in the box. Usually, she doesn’t spend as much time on projects but lately she seems to have developed more interest. 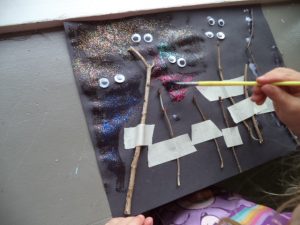 Doing crafts with kids depends on their interests. Your child may not be thrilled by fairies, but this fairy craft idea would also work for monsters or scary beings in the forest. On blue paper, kids could glue eyes for sea creatures and use green yarn for sea weed. The glitter glue might be bubbles in the water rather than fairy dust. What are your child’s interests?

This is #8 in a whole series of fairy and elf activities. Check the play-of-the-day for some to appeal to your child.