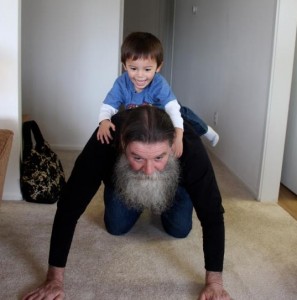 Gee, playing games with kids is not only fun, it’s a great way to encourage learning and kindergarten readiness, and interact with others. One of the first games that babies play is peek-a-boo, often followed by “the chase” as soon as kids learn to crawl. Bathtime rituals may begin or end with a “come-back-here” streak, complete with squeals and giggles. Horsey is a game that kids and grownups have probably been playing for centuries. Are meals at your house accompanied with the uh-oh game of wee one drops the spoon a dozen or more times for you to pick up? (Grandma or Grandpa is a game wrapped up in a people.)

These and other games have a huge role in development. The basis for conversation is taking turns, one person initiates and the other responds. That’s the same routine in many games. Little ones listen for the sound of an object hitting the floor. If it lands somewhere unexpected or takes too long, kids quickly look around. They are predicting and confirming using drop-and-listen. Games are a way to interact.

Simon Says, Hopscotch, and Ring Around The Rosie are other traditional favorites. Listening to instructions is one of the strategies practiced when playing Simon Says, as well as the language needed for giving those instructions. Kids will often make up their own games, playing with both the game and the rules. Concentration or matching pairs is fun on the floor or a digital device. Many apps use a game format because it is familiar and fun.

Today’s play-of-the-day is playing a game or several. Hopefully, it won’t be the “who-can-find-the-keys?” game! What other games are fun and learning for your child?

Did Santa bring any blocks or construction toys to your house for play-time and, of course, some kindergarten readiness learning and fun? Block play is a super activity for building all kinds of brain connections and thinking strategies. Following is a short list of a few of them. When kids engage in block or other construction play, they are:

Children can play with blocks and construction toys for years because the toys are adaptable for so many different stages of development. Blocks are available in a variety of materials, even sponge ones for the very young, that are in bigger pieces. Wooden ones make lots of noise when they fall over. Plastic ones are quieter but can be surprisingly painful when stepped on, as many parents know. Both boys and girls enjoy playing with blocks.

Hands inside a puppet make both the puppet and learning come alive, helping with kindergarten readiness in many different ways. Puppets:

Puppets can be created from old socks, paper bags, popsicle sticks, fabric scraps, even small styrofoam containers. Although puppets usually go over the hand, rather than it, apparently this plasticine is a puppet. To extend your child’s play, you can ask the puppet’s name. You may want to ask other questions such as what it is doing, if it knows how to sing a song, it’s favorite color, how it is feeling, if it is scared of anything, or if it knows how to be a friend. You may want a turn being the puppet and can use various voices such as low, grumpy, happy, squeaky and very slow. Two or more puppets can have their own conversations for double the fun! Does your child like to play with puppets?

Hands playing and having fun in water develop brain connections and help kids with kindergarten readiness. And water play can happen at the kitchen sink, in the bathtub or outside with a tub of water. Containers, plastic bottles, spoons, straws and sieves will provide kids with tools so they can scoop, pour, fill, and measure. … END_OF_DOCUMENT_TOKEN_TO_BE_REPLACED

Helping your child with kindergarten readiness doesn’t have to be a puzzle. But puzzles can help with developing skills and brain connections. Usually puzzles are wood or thick paper pieces with an unlimited variety of pictures. As your child puzzles out how the pieces fit together s/he is practicing: sequencing, patterning, visualizing and visual perception, … END_OF_DOCUMENT_TOKEN_TO_BE_REPLACED

Playing in the sandbox for some kindergarten readiness learning and fun certainly uses hands, so it’s another handy idea. Once kids have learned not to eat the sand, they can also explore digging, scooping, filling and dumping. This definitely appeals to kids because they do it over and over. There are many kindergarten readiness skills … END_OF_DOCUMENT_TOKEN_TO_BE_REPLACED

Block play is definitely a hands-on kindergarten readiness learning and fun activity. In this video below, you can see some of the ways that a child is learning in just a few seconds of play. Besides figuring out how blocks fit together and take apart, here are a few other skills that kids learn: lifting, … END_OF_DOCUMENT_TOKEN_TO_BE_REPLACED

With longer to-do lists than than you have time in a day, supporting children to develop brain connections and kindergarten readiness needs to combine play and learning with other things–even doing the laundry. With a little creativity, the laundry can be fun. Here is how: To play the mountain game, take the clothes out of the hamper and sort … END_OF_DOCUMENT_TOKEN_TO_BE_REPLACED

Healthy bodies and healthy brains grow as children play, developing kindergarten readiness. Every room in your house has learning and play opportunities. This post explores some of these in your child’s own bedroom. The bedroom can start the day with play and end it the same way. Depending on schedules, if there is no time … END_OF_DOCUMENT_TOKEN_TO_BE_REPLACED

Even the bathroom can be a space for play that supports all kinds of fun, learning, kindergarten readiness, and brain development. With kids, there seems to be a fair amount of time spent in the bathroom anyway. Adults rarely get a minute in there by themselves. Standing at the light switch while a baby plays … END_OF_DOCUMENT_TOKEN_TO_BE_REPLACED