There are still some sleeps before Father’s Day but in case a few days are needed for mail, here is a craft to make a special card. I saw an idea on a recent Busted Button Facebook post and knew how it could be used to tell dads that they are a treasure at the end of the rainbow. 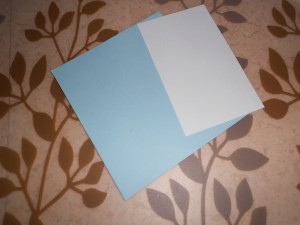 To start, a stiff piece of paper is needed because the buttons will be too heavy for regular paper. A half-sheet of paper is enough or a big recipe-card, and maybe a strip of paper for writing. The back of a card will work as long as it’s blank. Then, hunt through the button jar or box to find the colors of the rainbow. (This is a fishing tackle box.) I put the button box on the floor for the hunt because it would take years to pick them all up if the spilled. Now, for the fun.

On the back of the paper, kids draw a picture of their dad. This has to be done first. On the front or a small strip, adult hands can print the letters or trace them lightly for kids to color over. The top says ‘Happy Father’s Day’ and the bottom says ‘Turn over for treasure at the end of the rainbow.’ Last, kids can glue 6 buttons in a rainbow shape, one of each color: red, orange, yellow, green, blue, and purple. Let the buttons dry so they are good and stuck. 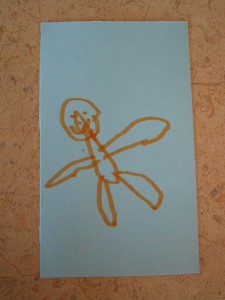 Dads have a special place in kids’ heart. When dad reads the card and then turns it over, there is his picture because he is the treasure at the end of the rainbow. Isn’t it nice to be treasured?

With vacations over the summer, many communities have kindergarten readiness and healthy start to learning events at this time of year. Did you know that fathers have a special impact on kids and early learning? According to research, when dads are involved in their lives, kids can be better talkers and thinkers, are more prepared for school and more easily deal with challenges. The following excerpt is from an article titled The Importance of Fathers in the Healthy Development of Children.

“Children with involved, caring fathers have better educational outcomes. A number of studies suggest that fathers who are involved, nurturing, and playful with their infants have children with higher IQs, as well as better linguistic and cognitive capacities.9  Toddlers with involved fathers go on to start school with higher levels of academic readiness. They are more patient and can handle the stresses and frustrations associated with schooling more readily than children with less involved fathers.” 10

To all dads and caregivers, enjoy the hugs! Will you get to play and have some fun this weekend?

Making something special for Father’s Day is far more than kindergarten readiness. Here’s a list of some ideas of fun things kids can make and do for dads and caregivers, plus they ‘ll be learning too: 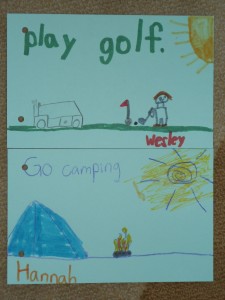 1. Drawing a Picture:  Drawing a picture of dad or something he likes gives kids some practice using visual skills. Kids may also be learning color words which is a complex thinking skill.
2. Making a  Card: Whether your child can print or copy the word Dad, trace the letters that someone else prints, or just practice some scribbles, this is all early writing. Having some experience that writing is meaningful helps kids understand what it is all about.
3. Cooking a Treat: Cooking something special for Dad needs math skills. Recipes use measuring and counting.
4. More Cooking: There’s some science learning, too. As we cook something, we closely watch what happens.  Observing is a key science skill.
5. Making a Gift Craft: Besides the feeling of accomplishment and pride that comes with  making a gift, children are learning to organize, follow instructions, and  coordinate various fine-motor skills.
6. Discussing: As kids talk about what to  do for their dad, there’s often some new words, which expands children’s language. They may want to do a puppet show, or sing a special song.
7. Imagining: As kids think about what to do for dad, they give their imaginations some practice. They may want to imagine a story just for dad.
8. Reading a Book: The readiness for kindergarten benefits include language, listening, predicting, following along, sound awareness, and more. Kids can “read” a story to dad.
9. Doing something for Dad: Taking out the garbage or helping to clean out the car helps children develop their emotional and social skills.
10. Doing something with Dad: Playing involves lots of different kinds of learning. Plus, it’s often a great way to get some healthy exercise, for both kids and fathers.
These are just a few of the readiness for kindergarten benefits connected to some Father’s Day ideas. Are some of these doable for you kids as they wish their dads and caregivers a Happy Father’s Day?

Father’s Day is a fabulous time for all kinds of fantastic kindergarten readiness activities. Check out all the ways that kids are learning. 1.Making a  Card: Whether your child can print or copy the word Dad, trace the letters that someone else prints, or just practice some scribbles, this is all early writing. Having some … END_OF_DOCUMENT_TOKEN_TO_BE_REPLACED

Tomorrow, is Father’s Day.  Several children in my kindergarten class live in a different house than their dad or have minimal contact. Even at this young age some of them have lost their dad. The issue of Father’s day and Father’s day cards and gifts has to be handled with sensitivity, just as Mother’s day does. … END_OF_DOCUMENT_TOKEN_TO_BE_REPLACED