Why couldn’t the pirate play cards? Because he was sitting on the deck, but kids can play with them for some fun, learning and kindergarten readiness. Pirates often played cards with each other since there were no video games. 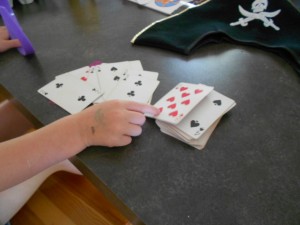 Sometimes we forget that such simple materials as paper playing cards can be as new and exciting to a child as a new app. Do you remember ordinary, regular playing cards? I have memories from what my kids call the ‘olden days’ of making our own sets. Hopefully, they are still sold in stores. Kids can use a deck of cards for numbers, counting, sorting, matching, making groups, and more. Simply having fun and feeling comfortable with numbers is part of kindergarten readiness.

One way that kids like to play with cards is to turn them over and spread them on the floor. On their own, kids will notice that there are different designs and may see that there are numbers. If they are interested, children can find make groups, such as all the hearts. Older kids may want to make a number line with a card for each number from 1-10. 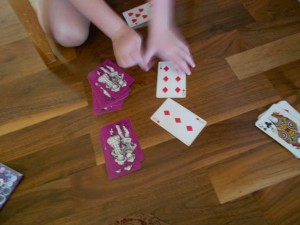 Some card games to play are Concentration or Memory. Choose 4 or 5 cards from two different sets, such as hearts and clubs and place them face down. Each person gets to turn over 2 cards looking for a pair. Often, kids can beat adults and can soon handle lots more cards. Another game is Who Has More. Each person gets an equal pile of cards, face down, and turns over the top card. The player with the higher number gets to take both cards. A variation is Washing The Dishes. This time the number on the card is how many dishes have to be washed so, of course, it’s the lower card that wins both. When there are several people, they can play Arrr Go Fish. Each person gets 7 cards, the rest go in the ocean, and everyone gets to take turns making pairs. When someone gets a pair, they get to say their best pirate Arrr. What other card games do pirates like to play?

A deck of cards is a super easy item to pack for vacation. Card games can be played just about anywhere, even in a tent when waiting for the rain to stop. Go Fish is one of my favorites. There are all kinds of decks, too, numbers, fish, people, animals, etc. Here is a sample deck that’s all A,B, C’s. On long, rainy days at home, find some paper, magazines and make your own cards. Or a quick Internet search turns up some printable Go Fish cards that can be colored or even painted. Lots of social skills are practiced in the context of a card game. Taking turns, asking, sharing, being a good sport, how to both win and lose, handling disappointment, and self-regulation of emotions are only a few. Oh, and how to have fun, too!  Go Fish -do you have an idea for vacation fun?