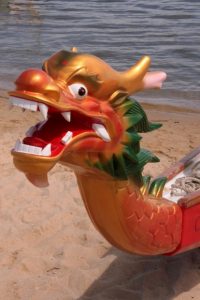 Besides reading books about dragons, how about some imaginary dragon stories? Kids can make up their own dragon adventures tales or we can do it with them.

Stories don’t always have to come from books. With a little bit of imagination, kids can tell a story too. Made-up stories can be about anything and happen anywhere.

When driving home in the car after grocery shopping, the kids were restless. It had been a long day and they were anxious to get home. To make the drive pass a little quicker, I started by saying, “Once upon a time, there was a dragon who was very hungry. There was nothing in any of the cupboards in his cave. He was fresh out of food. He didn’t want to roast any cows or sheep or knights or princesses, that would take too long. He needed something and soon.” In my mind, I thought the most obvious solution was to get a few coins from his treasure chest and go to the grocery store. But kids’ imaginations are often quite different from adults as are their imaginary dragon stories. 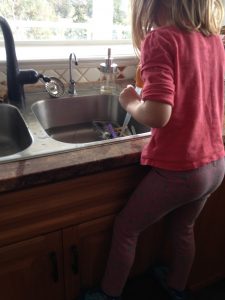 Little Sister decided she would make the dragon a magic soup and squirt it in his mouth and he wouldn’t be hungry any more. After helping to put the groceries away, while I made us something to eat, she stood at the kitchen sink and did just that. She played making the dragon some soup. The little medicine dropper was too small for a dragon so she used the turkey baster instead.

Humans are hard-wired for stories, according to Alison Gopnik. As Orion Jones writes, “Every culture bathes their children in stories to explain how the world works and to engage and educate their emotions.” (How the Human Brain Became Hardwired to Tell Stories)Think of this from a brain point-of-view. The brain doesn’t come with everything already downloaded. The brain has to learn things out for itself. This comes from experience but there’s so much to figure out and so much happening. No one person could have enough first-hand experiences and interactions. The brain needs some short-cuts. 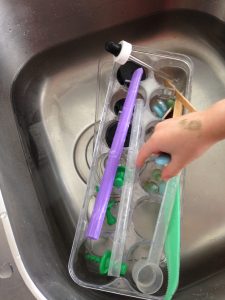 Stories are a tremendous way for brains to have an experience and learn from it without having to actually be there. Stories are an efficient way to link up a series of events and explain cause and effect. They are not all imaginary. For instance, think of a day as a story. First we get up, eat, and many of us get ready to go out. What happens after that? Hopefully, it ends at a decent hour and we get a good night’s rest. Our day has a beginning, a middle, and an end.

What other ending can you and your child think of for The Hungry Dragon? What might be your own imaginary dragon stories?

December is the darkest month of the year, maybe that’s why there are celebrations for light. Today’s play-of-the-day is a December night activity for kids.

This is the longest night, so a good time to go with kids to see all the lights in your area. You might even be able to do so before supper since it gets dark early. Because most places are considerably colder at this time of year, bundle up with warm coats, hats, and if needed, mittens and scarves. Despite all the lights outside, you may also need a flashlight.  A short walk can be as much fun as a longer drive so, if it’s possible, you may want to explore how different your family’s neighborhood looks at night. Check out the sky. Are there any stars? What happens to the colors of other things? Evergreen trees don’t look green at night. Instead, they are just black. Houses don’t have much color either, or clothes for that matter. That’s why it’s important to wear light-colored clothes at night, to be safe. If it’s not too cloudy, you might be able to see the moon. Did you know you can see a dance in the night sky? It’s the moon walk. 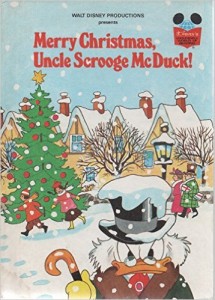 All the lights outside at this time of year are night lights on a pretty big scale. Some displays have thousands of lights and some cities have light parades. While adults will understand the symbolism of light and darkness, for kids, darkness can be scary and they are grateful for light. The well-known story of Rudolph and his shining red nose also uses this theme of light. Once you are back home, you might want to curl up with some hot chocolate and tell some more stories. Ghost stories, like the one about Ebenezer Scrooge (the Disney version is Uncle Scrooge McDuck), happen at this time of year because of the long hours of dark. But don’t make yours too scary!

Can you suggest another December night activity for kids?

Today’s play-of-the-day is about one of my favorite activities: story telling. In the United States it’s Presidents’ Day, in some parts of Canada it’s Family Day. Story telling is great for both places and everywhere else in the world. 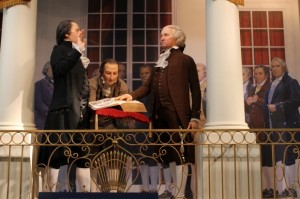 A famous story about George Washington is the one about cutting down the cherry tree. It’s often told to children to encourage them to be honest. 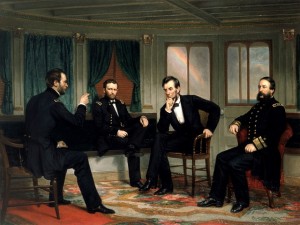 Abraham Lincoln was renowned as a story-teller, one of the best in the nation. His stories often poked fun at himself and he used the power of stories and humor to great advantage.

In both cases, stories are effective and enduring. In a quote from Psychology Today “Telling stories is the best way to teach, persuade, and even understand ourselves.” Stories link us to each other and to history.

To celebrate the day, no matter where on the planet your family is, enjoy some story time together. You do not need to look for a book, you can make up a story. In case your imagination needs a little help, randomly find any two objects that are at hand. They might be two things on the table, such as a spoon and piece of paper. Using the familiar pattern of a problem to solve, maybe the spoon wants to say something and is trying to write but the words don’t show up. The paper tells the spoon it needs to be a pen because pens have ink. The spoon uses some juice for ink and writes Hello. Anything can be used in a story. 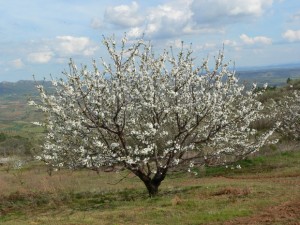 Kids love to think of stories and will sort of use the structure of a beginning, a middle, and an end. Their stories may have a problem and solution. Sometimes the stories are so elaborate that the beginning doesn’t connect to the end, but the parts are there. Imagination makes use of dinosaurs or fairies, talking animals or super heroes.

What stories can you and your child tell today?

Today’s play-of-the-day starts with a question. Are you telling your own stories to your children? Think of these stories are a sort of oral valentine. Human beings are hard-wired for stories. The human mind “…is a story processor, not a logic processor.” (How the Human Brain Became Hardwired to Tell Stories, by Orion Jones) Brains … END_OF_DOCUMENT_TOKEN_TO_BE_REPLACED