Kindergarten readiness needs lots of space–the kind that kids need for moving around, spreading out their toys, and that we don’t seem to have enough of in the house. Especially when the weather means the kids can’t go outside. 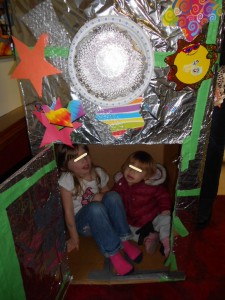 Children’s physical development is important for bodies and it also important for brains. As babies figure out movement patterns, the brain is creating the connections and pathways that it will use for later learning of language and math. Moving is actually another sensory channel, like sight, hearing, taste, touch, and smell. Besides these 5 senses there are two more, the sense of movement and the sense of the body’s position in space. For healthy bodies and powerful thinking kids need to move.

The letter S play-of-the-day is to find a space for your child to move. The activity could be dancing, playing in the playground, having fun with a ball, or play wrestling on the carpet with daddy. Some communities have parent and tot gym times, or swim and skate lessons for preschoolers. Kitchen chairs can be set up to make a long tunnel just right for slithering. Coffee tables have little spaces for little bodies to wiggle under. There’s lots of ways to move and groove for little kids, and big grownup ones too.

Here’s a rocket ship that will soon blast off into space and land on a new planet. How do the creatures on this planet move in their space?