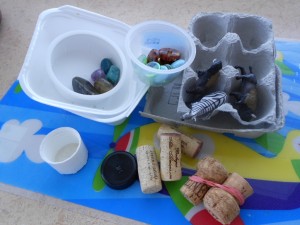 Kids are natural scientists exploring constantly so making some pirate boats that float is a voyage of discovery, fun, learning, and developing skills for kindergarten readiness and beyond. The recycling box at home holds a treasure of things to use, like styrofoam containers, corks, plastic and metal lids, popsicle sticks, etc. Include some treasures to put in the boats, like rocks, buttons, or beads. Either at the kitchen sink or using a big container of water, kids can make boats and experiment with how much will float. 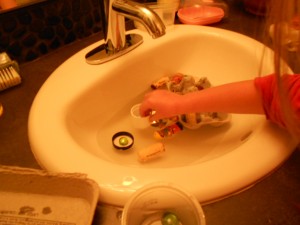 Everyday children are trying and figuring out how things work around them. This is what scientists do. We can extend their play by talking with them about what they see happening and asking questions. What way do they have to put things in the water so they will float? How much treasure can they put in a ‘boat’ before it sinks? Does something hold lots of treasure? What happens when there is too much treasure in a boat? By asking questions and inviting kids to explain to us, they attach words to what they are discovering. 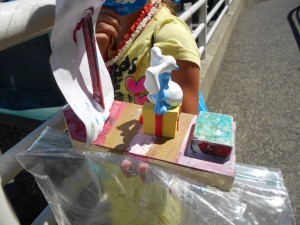 This activity kept Big Sister busy for a long time as she tried many different combinations. Little Sister is pretty good about not putting things in her mouth and loves water play too. She mostly liked to just put things in the water and wasn’t really interested in making boats. Kids will play at their own level and investigate what interests them. Older kids may want to create their own boats using recycled materials or even lego. Plasticine will also work to make boats, but needs to get dried off so it doesn’t get gooey.

ids aren’t the only pirates that like to make boats that float. Grownups also enjoying playing around with boats and other things that float–or not.

What other materials can little pirates use to make boats?

P.S. Where do pirates keep their boats? In the harrrbor.