The Magic of Cooking with Kids at Christmas

Just like the Grinch, we need to be reminded that the magic of Christmas for kids is not the toys and presents but the activities and the time together, like cooking. Many recent posts on blogs and Facebook have been about spending time in the kitchen with kids making special treats for the family. The work has been transformed into fun and kids enjoy being involved and included. 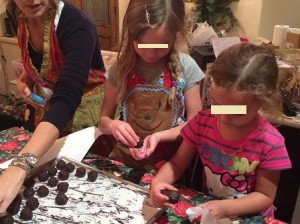 Families all make different favorites. It could be pyrogies, tamales, chocolates, kumle (potato dumplings), cinnamon buns, butter tarts, or several kinds of cookies. Often, these special dishes have been made by parents, grandmothers, aunts, and uncles, for generations. In a way, the simple activity of cooking is a sort of time-travel, connecting the past to the future. Someday, our kids will be making these Christmas treats with their kids. 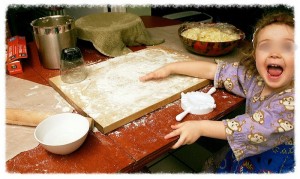 When we cook, we get to be magicians. Mixing up ingredients and cooking them into something tasty is a kind of magic itself. Who knew that flour, sugar, butter, and a few other things could make cookies? When cooking, there’s lots to smell and taste. Hands are allowed to touch and feel–as long as they’ve been washed, so nobody tastes fingers. Abra-ca-dabra, a spoon is a magic wand.

It’s no wonder the holidays seem so special to children. Cooking without kids is often easier than cooking with them, but we recognize that letting them help is worth the extra effort. Kids feel appreciated and enjoy contributing. Being part of a group later on at school will be easier if kids feel like part of the family now. Sometimes, the whole big world, where so much is confusing, is scary for kids. Having adults close by and working with them boosts children’s confidence that it’s maybe not such a bad place after all. What kind of magic happens in the kitchen at your house?