A Play-Date with Dirt

Spring arrived yet where you live? We have had some marvelous sunny days calling to us to come outside, so Z can be found playing in the dirt. Just like for many children all across the world, this is a favorite way to play. 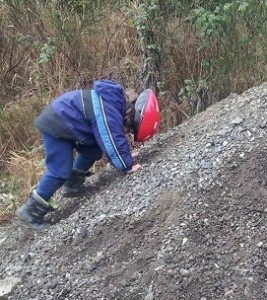 When kids play in the dirt, in a way, they are their own play date. Dirt gives kids the opportunity for some interaction with themselves. Well, at least with their own senses.

Dirt play is highly sensory and much more than hands-on. Dirt gets under clothes and all over the skin. It’s texture can be scratchy, gritty, fine, or slippery. Dirt can be warm where the sun is shining or cool underneath. It might be dry or damp. Enough moisture can turn it into mud. A handful of dirt feels almost as light as air while a bucketful is quite heavy.

Dirt might look like it’s one color and there’s not much to see, but that’s at first glance. Up close and personal, there could be little bits of stones, leaves, sticks, and grass. Dirt can be a home for bugs and a variety of creepy-crawlies.

Eyes and skin aren’t the only parts that get right in the dirt. Dirt can have a smell and somehow it smells like nature. Despite all the warnings, sometimes kids get close enough to even taste it.

Friends talk to each other, and dirt “replies” with sounds instead of words. As hands and feet climb, dig, pat, and pile, the dirt whispers right back.

Play dates with a pile of dirt involve emotional feelings as well as physical ones. Play time can be very exciting and creative and it can also be relaxing. It’s a great way to release tension and anxiety. Dirt demands a certain amount of respect because it can hurt back. While dirt in a sock is uncomfortable, a tiny speck of dirt can be painful if it gets in an eye.