Children play in a tremendous variety of ways, but for kids, the best play is nature. Nature play is on the endangered list, but for X, who will be 3 soon, it’s one of the ways he often plays. 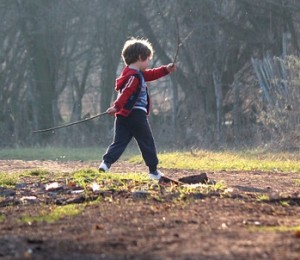 Here is what his mom says about how he plays, “ X adores playing outside and simply exploring. He enjoys pulling his sled around, digging holes, driving small trucks around, picking up apples in the fall, shoveling snow in the winter, and now, collecting pine cones.

This isn’t just play outside in nature, it’s play and interacting with nature. X gets to decide what he’ll do and how he’ll do it. Of course, there are some things he’s not allowed to do and his parents have checked the area for things that might be unsafe. For the most part though, his play is self-directed. It’s also very sensory. There’s stuff to feel, see, hear, smell, and sometimes, even to taste. Outside has enough space for another fun way for X to play–running around in circles with the dog.

X gets to experience first hand the changes in nature from day to day, and season to season. Nature becomes an integral part of his play as he digs holes, makes roads for his cars and trucks, and moves the snow. The dirt, sky, trees, sun, and wind are not just a background for his play. They become part of it and part of children themselves. The way to encourage a connection to nature is through nature play.

Nature play contributes to the whole child. The Pennsylvania Land Trust has an extensive article on Nature Play, Nurturing Children and Strengthening Conservation through Connections to the Land.  The writers remind us, “Unstructured, frequent childhood play in informal outdoor settings powerfully boosts the cognitive, creative, physical, social and emotional development of children. It also engenders deep conservation values—more so than any other factor.”

Did you know that kids only spend about 30 minutes a week in unstructured outside play time? If they could only have 30 minutes a day instead. For many reasons, the best play is nature play. Is this one of the ways your child plays?