Cars, trucks, train cars, and other toys get to be part of some science fun and learning with this play-of-the-day. All aboard for some simple ramp science. 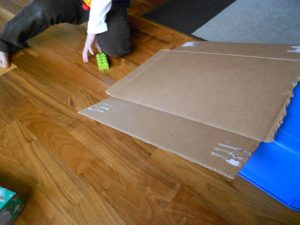 While grownup engineers want to know how to construct the safest, most efficient roads, kid engineers only want to know how to make toy cars go faster. The name of their game is often zoom, zoom. When kids are playing with transportation toys, we can ask them if they have an idea about how to make them go faster. They may suggest some things to try. We can also show them a simple ramp. 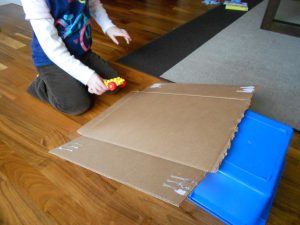 To make a ramp, we used a piece of cardboard from a box in the recycling and an upside down plastic tub. Big Sister soon figured out that the ramp made the Duplo car go faster. She added a box from a puzzle on the shelf to raise it even more. She spent a good chunk of time playing with toys and the ramp. Baby Sister wanted to push the cars but it was too much work to push them up the hill so she used the piece of cardboard to be a flat road. 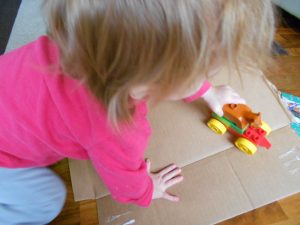 We can introduce a new idea into children’s play and then let them explore on their own. Simple ramp science is an idea kids can use in their play and build on. Not all kids will be ready, just as Baby Sister wasn’t, but her older sister figured it out. She was interested enough to test her thoughts about ways to make the cars go even faster. 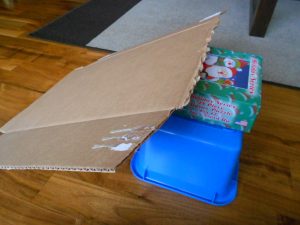 She likes the animals that fit on the Duplo cars so she added these too. This independent questioning and investigation is only one of the purposes of children’s play. It’s critically important as parents, caregivers, and teachers, that we make sure kids have time and space to play. 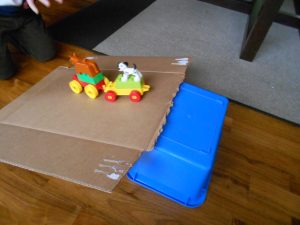 Will there be time and space for some simple ramp science play for your child today?