A rare Olympic medal for kindness was awarded in Rio. What are your thoughts on helping children show kindness? What do you and your child do for kindness? 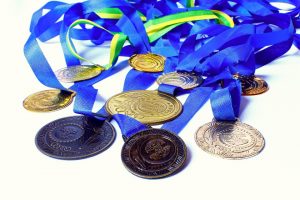 During the women’s 5000m heat, two runners collided and fell to the track. They helped each other up and then continued encouraging and supporting so they could finish the race. Nikki Hamblin and Abbey D’Agostino came in last on the track, but first in many hearts. Being kind to a competitor was more important than a chance at medals. In the long history of the Olympics, this medal has only been awarded 17 times, but the International Olympic Committee stated, “The D’Agostino and Hamblin story is one of humanity and sacrifice which has already captured the hearts of people across the globe.”
Helping children learn and show kindness has been a topic I’ve blogged about a few times. Here is an excerpt from an earlier post:

There are different approaches that we can use to help children be kind. As with many behaviors, children respond to the example of adults around them. When they see us being kind, they are more likely to be kind themselves. We need to acknowledge when we see them making an effort to be kind. Rather than rewarding their behavior, we can smile and let them we noticed by saying something as simple as “I see you doing something kind. Did you know that was kind?” That also sends the message that we think being kind is important.

Children need to hear the words that we use that indicate kindness, such as thanking others or asking “Can I help you?” Showing is another strategy. For instance, instead of grabbing the cat, we can hold a child’s hand and show how to gently pat. Kids seem to absorb ideas in stories so reading books about being kind is also effective. “How Kind” by Mary Murphy is a simple book for younger toddlers. “I See Kindness Everywhere” by Shelley Frost is the story of a child who recognizes the kind actions of others. There are many other books and stories that we can share. 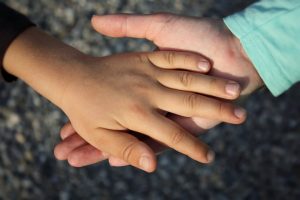 And now, there is an Olympic-sized real-life story for helping children show kindness. Faster, higher, stronger, and kinder.  What are your suggestions and ideas for this?