It’s time to play and celebrate International Fairy Day. At summer solstic, the boundary between the fantasy world and the real world is blurred. 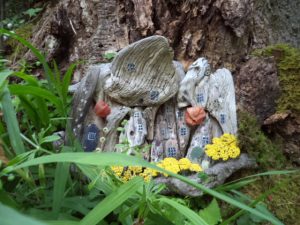 This fantasy world doesn’t only appeal to kids:

Whether you see them as small winged tenders of the deep natural places of the earth, or as tall stately figures with fair skin and hair, there’s one thing for certain. The world has been absolutely captured by the Fairy Craze. These creatures appear on everything from mugs to t-shirts and have been the subject of children’s fairy tales and even supernatural romances. Fairy Day celebrates these incredible mythological creatures that have captured the imagination of people everywhere and their diverse history.
(Days of the Year: Fairy Day) 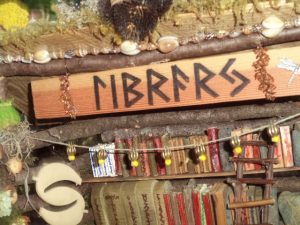 We spent some time roaming the forest and gardens, nurturing our senses and renewing our spirits. Seeing certainly topped the list as we looked for fairy houses, tucked in with the flowers and trees, marveling at all the tiny details, but there was still more. We could hear the soft forest sounds of birds and insects, the excited cries of kids as they found more fairy houses, and the gurgles of water here and there. The cool shade refreshed our skin from the hot touch of the sun. The flowers, grass, and trees perfumed the air to delight the sense of smell. Later on, we tasted fairy cupcakes and cold lemonade. Not at the fairy restaurant though, a people one. 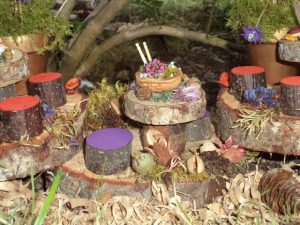 Are there any fairy events happening in your area? You can also create your own. Practically any large outdoor-friendly container will do to make a fairy garden. There are gazillions of books to read and local libraries may even have a fairy tale time. We often forget we can also just tell some fairy stories. Sing fairy songs, dance around in the yard, have a paper towel roll sword fight. Dress up in a towel to make a magic power cape.

For children, the boundary between the fantasy world and the real one is much less distinct than it is for adults. All too soon, the magic seems to disappear. What might you and your kids do to play and celebrate International Fairy Day?

P.S. This is part of a whole series of fairy play. Come play on the blog at 123kindergarten.com