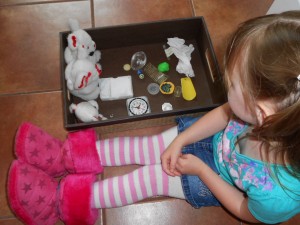 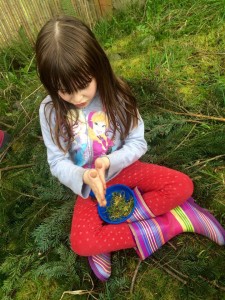 Play is valuable for young children. Think of it as the pot-of-gold treasure at the end of a rainbow and we can make it happen for kids. 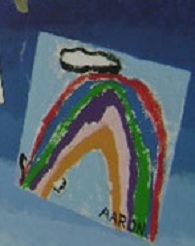 We all want what’s best for kids and go to extraordinary links to deliver that. For young children, that best includes time and opportunity to play. In a way, that’s an easy answer. It doesn’t give much information about the ways to play or what kinds of things kids need to play with. Professor and researcher, Dr. Alison Gopnik explains:

“Children learn by playing with everyday objects and by pretending. The old standbys of water, sand, mixing bowls, and cardboard boxes are still the most effective ways for babies and young children to learn about the physical world while the whole world of pretend—dolls and costumes and toy dishes—is the most effective way to learn about the social world.” (Dr. Alison Gopnik on the Evidence that Connects Play to Learning)

Leprechauns are very playful by nature, so here are a few ideas for ways to play today. 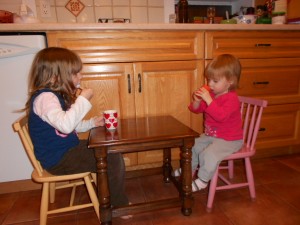 For kids, treasure can be spelled p l a y, because play is valuable for young children. Here is a wish for you and your child,

May your day be filled with laughter and play.

A treasure arrived in our area today, a very welcome sun! We’re going outside for a leprechaun walk looking for green. Maybe we’ll see one. 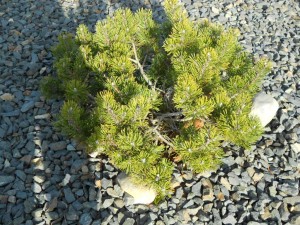 A leprechaun walk looking for green is a sort of treasure hunt. For younger kids, it may be enough fun just to be outside and occasionally notice something green. Older kids may enjoy taking a paper to make a list of all the green things they find.

What’s outside that’s green? In our area, the grass is showing green. Unfortunately, there are quite a few green weeds poking up in the rocks in the beds. There are some green bushes and a couple of houses. We couldn’t see any green cars at all. At the intersection down the hill, the light was sometimes green.

Noticing colors seems like an ordinary, mundane activity. It might look that way, but it is really challenging for brains. Some information on-line states the human eye can distinguish about 7 to 10 million different colors. That’s a staggering number for kids to be able to match any color to its right name. There may not be many words for all these colors for kids to learn, but figuring out which ones belong to which name is an enormous task. Picking things that are green can be lots of brain exercise. There will be many variations on the color itself, and many different items that will be green. This is true for every single other color too. 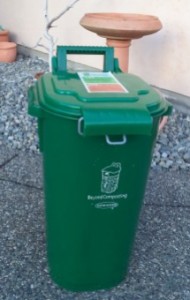 When you are out with your child, you can ask questions such as, “Is that car green?” The likely response will be no because there are so few. Other questions like, “Is the grass green?” will have a yes answer. These answers will give you an indication of how your child is doing matching colors to names. If your child isn’t there yet, you can ask what’s green and find items yourself. Learning colors is very complicated. It takes time and lots of color experiences. Of course, fun makes it easier.

Today is also our garbage pick-up. Little Sister noticed before anyone else that the trash can is green. While adults know the names of colors, we often don’t notice things that are obvious and ordinary. Sometimes, kids’ eyes see more than ours. What does your child see on a leprechaun walk to look for green?

Crafts and green snacks are not the only way to celebrate St. Patrick’s Day. For a play-of-the-day, here is an idea for leprechaun sensory play for kids. Leprechauns like gold and shiny things so we started the sensory play with a search thru the button box. Both Big Sister and Little Sister love to look … END_OF_DOCUMENT_TOKEN_TO_BE_REPLACED

Stories of leprechauns, rainbows, pots of golds, 3 wishes, and magical powers are especially appealing to children because kids are also little people. So much of their lives is controlled by adults that children feel they have no power at all. This idea is suggested in many stories where the children get swallowed up. Leprechauns, … END_OF_DOCUMENT_TOKEN_TO_BE_REPLACED