Does kindergarten readiness rock for you? I love the play on words and what could be more fun than rocks? Did you know that word play also helps children with a basic skill for later learning to read?

Before children can tackle words on a page, they need to learn that words are made of bits of sounds. For instance, rock has the rrrr sound, the awh and the kh. Children’s brains will figure this out provided they get lots of word stimulation by sharing books and stories, listening to others, talking, singing, and playing with language themselves. This skill takes time to develop but parents and caregivers can help kids by using lots of words whenever they can and by playing with them. 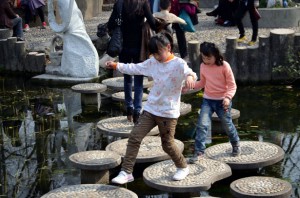 The sound that words make at the start is one way to play with words. Although kids may not have developed the rrrr sound when they talk, they can hear it. When talking about rocks, you can say “Rocks kind of goes rrrrr. RRRRRocks. I think red starts rrrrr, too. Do you hear that rrrr rocks, rrrr red?” Then you can name some other things that start rrr: roll, river, rose, read, ring. What else can you think of? If you are inside, you may want to suggest that the two of you have a rrrr race to pick up the toys. Or, you might need to rrrr run to catch the bus. Who can do the biggest rrrr roar?

Your child may or may not be able to think of some things that go rrrr but you have add a few more stepping stones to the brain path that leads to understanding about words. Does this activity rrrr resonate for you?

Did you know that asking children about words that rhyme is often included on kindergarten readiness evaluations? Not all kids will be able to rhyme words before they start kindergarten and this tells teachers which ones will need more activities with words and sounds.

Why is rhyming words so important? Children need to be able to hear the bits of sounds that make up words. These sound pieces can them be recombined to make different words. (This is called phonological awareness.) For instance, the ‘at” in cat is one sound piece that is in mat, hat, and rat. Or the ‘ug’ in bug can be in mug, run, tug, and dug. 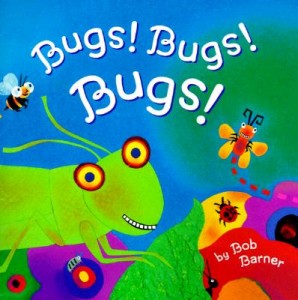 Kids need exposure to lots of words before they develop this ability to divide words into their sound parts. One way we can tell when their brains have made the connections for this is when they can say words that rhyme. Kids will figure this out all their own as long as we give them plenty of language stimulation. This can be with songs, stories, books, and talking together as much as possible. As you zip up a coat or button a sweater, you can tell your child that now he is as snug as a bug in a rug. Or ask your bug if she would like her juice in a mug.

Many children’s books have words that rhyme. This book by Bob Barner has wonderful pictures of all kinds of bugs as well as simple rhyming text. Can you turn your Monday into fun-day with some bugs and hugs?

Since it’s the first day of a new month, an appropriate book would be Please Try To Remember The First of Octember. There are messages about patience and waiting, and the names of the months in this book, but one of the best learning and kindergarten readiness activities is words that rhyme. For those that follow this blog, you could have probably predicted that somewhere I’d mention words and their sounds. Why? Being able to rhyme words is a crucial part of learning to read.

Words are made of several different bits of sounds. For example, Seuss has an sss sound to start, then an oo in the middle and sss at the end. Children need to be able to hear these bits of sounds and then combine them in different ways. This is called phonological awareness. Later on, these sound bits get attached to letters so that kids can learn to read and spell. This is so critical for later learning to read that readiness for reading correlates to the ability to rhyme. This happens about the age of 4 and is sometimes used to evaluate children’s readiness for kindergarten. Lots of exposure to talking and books helps kids develop these brain patterns and connections for words and sounds. And Dr. Seuss books have terrific rhyme stimulation.

Today, read a book that rhymes to your child. Did you know that rhyming can help to remember?

Backpacks are on on track for the kindergarten readiness skill of rhyming. What words sound like back and pack? Yak,track, black, tack, jack, quack, crack, etc. Children will learn to rhyme about the age of 4, but in the meantime, they need to hear lots of rhyming words. One way to do this is with books … END_OF_DOCUMENT_TOKEN_TO_BE_REPLACED

For a whole month I haven’t posted about words and sounds. For those of you who check-in regularly, you’ll know that one of the consistent suggestions for kindergarten readiness activities is to play word games with little ones. Why do I mention this so often? Because the understanding that words are made up of sound … END_OF_DOCUMENT_TOKEN_TO_BE_REPLACED

Doing laundry sounds like…learning. I can think of some other descriptions but I’d better not include those. In any case, the laundry can be used to help with readiness for kindergarten. Before kids learn to read, they need to figure out that words are made of bits of sounds. (This is called phonological awareness.) For instance … END_OF_DOCUMENT_TOKEN_TO_BE_REPLACED

Do you remember nursery rhymes that you learned as a child? Jack and Jill, Little Bow Peep, Little Boy Blue, etc. How about this one: Hey Diddle, diddle the cat and the fiddle. The cow jumped over the moon.   The little dog laughed to see such sport and The dish ran away with the spoon. … END_OF_DOCUMENT_TOKEN_TO_BE_REPLACED

As children’s first teachers, parents and caregivers are the ones that start children’s lessons for learning to read. The first ones are of course talking to kids and helping them learn to use language. After that, there is a critical concept that kids seem to learn without our even knowing. This is that words are made of bits … END_OF_DOCUMENT_TOKEN_TO_BE_REPLACED

What rhymes with socks? For those of you who have been following this blog, you know that at least once a month, I post a blog about rhyming. Such a simple, little word game as making words that rhyme really prepares your child for later learning to read. Children need to be able to hear the … END_OF_DOCUMENT_TOKEN_TO_BE_REPLACED

Today, is the last day of May. Hey, that all rhymes. What else rhymes with may? May–stay, play, hay, lay, pay, ray, way, etc. We’re having a ton of  fun, Hon.   For over a month, I haven’t mentioned rhyming words as an important kindergarten readiness skill, so I can be forgiven for bringing it up … END_OF_DOCUMENT_TOKEN_TO_BE_REPLACED