Pirates usually bury their treasure in sand or dirt but for an exciting change and even more kindergarten readiness fun and learning, try burying it in ice! This is especially good activity for a hot day. To make the treasure cubes, let your child find some small items to be treasures and arrange them in an ice cube tray. Fill with water and slide them into the fridge. Once the ice cubes are frozen, pop them out and kids can find various ways to melt the ice and recapture the treasure. 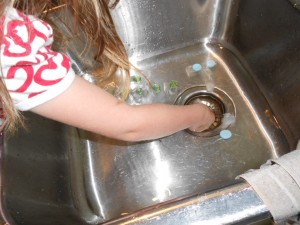 Young children do not have the same awareness of time and sequence that seems so obvious to us. Particularly when adults ask children questions to figure out the order of conflict, it’s almost impossible to find out who did something first because kids do not understand what happened first and then second and then third. This activity gives kids an opportunity to practice sequencing. Before finding the treasure, it has to get buried. What has to happen first? (gathering some treasure) Next comes putting it into the tray. Then what needs to be done next? (filling the tray with water) Something very important needs to happen after that. (putting the tray in the freezer) 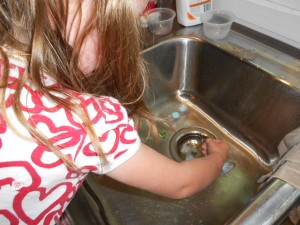 Kids will likely ask several times if the ice cubes are frozen yet, but this is part of the learning about time as well. Although little ice cubes freeze faster, they melt much faster too. Next time, I think we’ll put the treasure in a big container of water but so the items are not all at the bottom that needs to be done in layers. Certainly, this is more steps in the sequence. All that takes much longer, but digging in a big chunk of ice with some spoons will also take more time, as in all afternoon? Isn’t this a cool pirate fun activity? 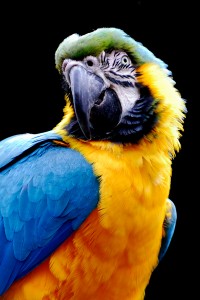 Knock, knock: Today’s kindergarten readiness fun and learning activity is brought to you by pirate jokes. There are many pirate kids’ jokes and a sense of humor is a skill that develops.

Humor is much more than a reaction to a funny event, it is really a series of complex thinking processes. Children first need to notice what is happening and recognize that it is not usual or normal. In order to respond on an emotional level, kids have to figure out if this unusual situation is funny or not.  Then, children need to match their feelings to their behavior, either laughing or displaying another reaction. That’s several things that all need to be connected. 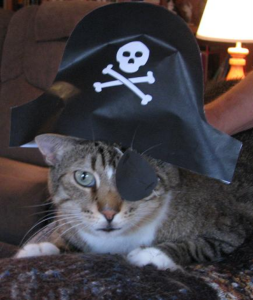 Have you ever listened to kids telling jokes? They do not always get the right punch line, because they are still figuring out the connections and developing their sense of humor. To make it even more complicated, the intention underlying a joke is not stated, only hinted at. For instance, when a parent tells a child “I”m a fierce pirate and I’m going to chase you and get you to be my prisoner,” that is what we would consider a joke. A child needs to be aware that the words, no matter how fierce they sound, do not match the intention, which is to play a game. In order to have the appropriate emotional response, which would be squealing, laughing, and running away while trying to get caught at the same time for the tickle and hug, the child needs to understand the situation on several levels. To do this takes practice. Even adults sometimes make mistakes when it comes to humor and jokes.

Dig up a treasure of pirate jokes and share them with your child.
(And with me in the comments!) Knock, knock. Who’s there? 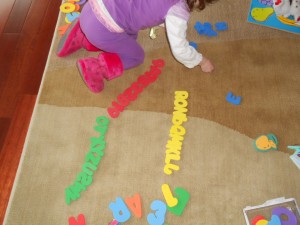 No matter which letter you and your child thinks is the favorite letter, pirates need to know them all so they can write clues and directions on treasure maps. For a play-of-the-day, kids can play and have fun with letters.

Letters can be considered as toys and now they come in foam, stickers, wood, plastic and other materials as well as carved onto wooden blocks and with magnets on the back. Simply playing with letters before starting kindergarten helps children feel more comfortable with them and creates a positive foundation for later learning. 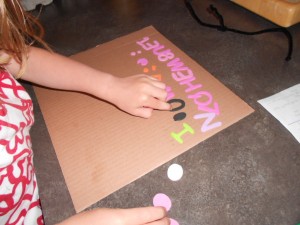 There is nothing simple about play. This is one of the best ways for children to learn. Some ways that kids can play with letters are to spread them all out, sort them into colors, line them up, pile them into towers, make pretend alphabet soup, stick them onto papers, and even give them a bath. As children play with them, they will build up pictures in their mind of the letters so they do not seem like such strange marks when it comes to learning their names and printing them. Memorizing the way the lines and bumps look for each letter is a huge task and lots of experiences playing with them hands-on and seeing them over and over is as valuable as treasure.

Just as a pirate builds up a whole trunkful of treasure by depositing them one at a time, so do kids store up a ‘brainful’ of familiarity with letters each time they play with them. As they play, we can name some of the letters and ask kids if there are any letters that look almost the same. Which ones are pointy or round? Are there some that are just lines? Which ones have straight lines? Are there any zigzag or curvy ones? A few comments here and there are like polishing the treasure of learning. Can you help your child amass a  brain treasure of letter play fun and learning?

Pirates dig for treasure, but just playing in the sandbox is a learning and fun treasure that also supports children’s development and kindergarten readiness. Just like real pirates, kids can bury items and then dig them back up. As kids play in the sandbox, they are: exercising their muscles and learning how to use tools. … END_OF_DOCUMENT_TOKEN_TO_BE_REPLACED

Pirates collect treasures and to kids practically anything can be a treasure. Making a collection can be a fun learning and kindergarten readiness activity. Treasure for a child to collect might be rocks, shells, driftwood, sticks, wrappers, shiny foil, pine cones, buttons, stickers, and other items. Some are more collectable than others. When children make … END_OF_DOCUMENT_TOKEN_TO_BE_REPLACED

Once upon a time, a pirate helped some kids with fun, learning and kindergarten readiness. How? By telling stories. While there are great books to read with kids all about pirates, we often forget that we can just tell stories. Plus, it’s important to encourage kids to make up stories and tell them to us … END_OF_DOCUMENT_TOKEN_TO_BE_REPLACED

For some pirate fun, learning and kindergarten readiness, today’s play of the day is to move like a pirate. Movement activities are important for children’s healthy development, both bodies and brains. Moving is one of the strategies that the brain uses for creating pathways that are used for learning. We all have an additional two … END_OF_DOCUMENT_TOKEN_TO_BE_REPLACED

For today’s pirate play-of-the-day for fun, learning, and kindergarten readiness, kids can use a treasure that’s buried deep inside–their voices! The tune is familiar to many but the words are different. This goes to Head and Shoulders, Knees and Toes. The action in the last line of each verse can be changed to lots of … END_OF_DOCUMENT_TOKEN_TO_BE_REPLACED

Why couldn’t the pirate play cards? Because he was sitting on the deck, but kids can play with them for some fun, learning and kindergarten readiness. Pirates often played cards with each other since there were no video games. Sometimes we forget that such simple materials as paper playing cards can be as new and … END_OF_DOCUMENT_TOKEN_TO_BE_REPLACED

Children do not make the distinction that adults do between play and work. What we call work may be play for them and it is part of fun, learning, kindergarten readiness, and life skills. Sometimes, kids even see these activities as so important that they are insistent they get a turn. Much of children’s play … END_OF_DOCUMENT_TOKEN_TO_BE_REPLACED