A space sensory bin invites children to engage and explore. There are wonderful materials and items to use. We chose soap foam, bright colors, and stars. It was sensory for both touch and visual. 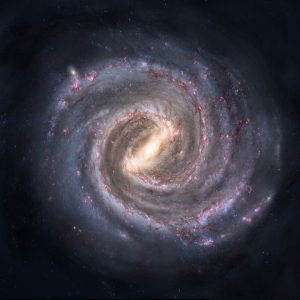 In photos, the Milky Way looks like white swirls. When doing the dishes, Big Sister thought the soap foam looked like the Milky Way so, of course, we had to make more. A blender is really the best way to make big amounts but we tried a straw too. The soapy bubbles were like colors dancing across space but a straw doesn’t make lots. We mixed 3 batches of soap foam and poured them into a big, clear plastic bin. 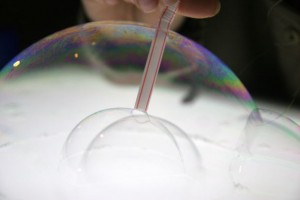 Little Sister liked feeling the soap foam and stirring it with a wooden spoon. There were no swirls like the Milky Way until we started to add a few drops of food coloring. Then, the colors really did look like a swirling galaxy. This was so easy and the kids loved watching the colors appear. The drops would just disappear into the foam until the kids used the wooden spoon to stir them around in the foam. After lots and lots of stirring the colors did blend to look more like a grey brown soup but this happened quite slowly. In the meantime, it was fascinating to observe. 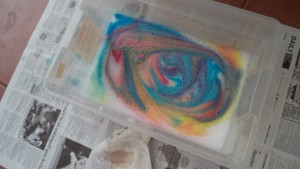 When the soap foam looked dark like outer space, the kids added some plastic stars. The stars didn’t float so they had to use their fingers to find them in the foam. Only by feel could they get out the stars. They didn’t spend as long on this part. We carefully emptied out the bin and made sure no stars got poured down the sink. After spraying off the soap, Little Sister played with the stars in the clear water in the sink. 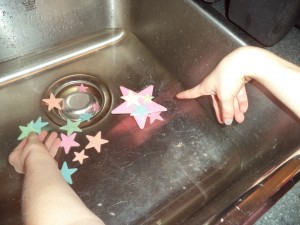 Yes, you can make amazing sensory bins for your child. You can also make a pretty ordinary space sensory bin with soap foam. Either way, kids get to play. Have you tried one?

No need to go into orbit for this planet movement activity fun, kids can do it right at home. They will need a space for moving and a flat space ship.

Space ships aren’t usually flat, like magic carpets, but kids need something they can get into and out of, or on and off easily. The idea of this game is to count down, blast off and travel to a whole series of different planets for a variety of ways to move. This is how Little Sister played: 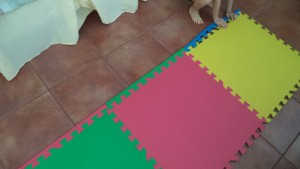 Little Sister put together some foam mat squares to be her space transport. She got into her space gymnastic suit and counted down. After blasting off, she pretended her space ship zoomed in space and then landed. The first planet where she stopped was the Jumping Planet so she got out and jumped around a few times. Then, it was back in the space ship, count down, blast off, and zooming some more. The second planet was the Crawl Planet, so she could only move by crawling. After some time on that planet, it was time to do the whole sequence and land on another planet again. Planet #3 was the Swim Planet, which meant stretched out on the floor with arms and legs spread out in order to move by swimming motions.

Leaving the Swim Planet required a modification of blast off position. She stretched out on her space ship so she could swim away. The next planet was the Hop On One Foot Planet. Her visit there wasn’t too long. At this point, I was no longer needed to suggest a kind of movement activity. She thought of a few herself, such as the Twirling Planet and the Walk Like A Robot Planet. 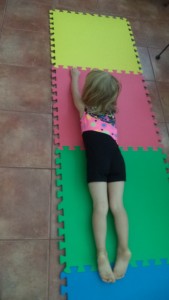 We know from experience that kids move all the time, but might not know why. Movement activities support the brain to make connections used for thinking. Kids need to move, not just for body development but for brain development too. Muscles need strengthening and coordination requires a tremendous amount of brain activity. A game, like this planet movement activity fun, is a great way to encourage kids to move. What planets will your child land on?

For more outer space or down-to-earth activities, land on the blog or play-of-the-day tabs.  Welcome to Planet Play!

As Einstein said, “Imagination will take you everywhere,” so for a play-of-the-day, kids can blast off with some space pretend play. 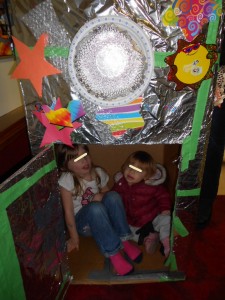 Space pretend play doesn’t necessarily require any materials, but kids might want to have a few things. A space suit is beyond most dress-up tickle trunks, although kids are great at turning a small item like a wrist band into all they need. A rocket is much easier to do. To make a rocket or space ship start with an empty cardboard box. Using markers, kids can color on some controls. Your recycling basket will quite likely have other items. An aluminum pie plate could be a window. Glue or tape some plastic water bottle caps to be control buttons. Make stars from cereal boxes or scrap paper. Just getting the rocket ready needs lots of imagination.

Once it’s time to blast off, kids will use some of what they already know and will create what they need. Pretend play is a combination of fantasy as well as reality. Not only that, it mixes thinking with action. Most kids understand that space is far away and rockets zoom but they imagine what they see and hear. Their brains analyse problems and come up with solutions. Kids thinking will also include planning, predicting, and comparing, to name just a few.

Blocks, Lego, and other construction toys might be included in space pretend play. Blogger mum and educator at YouCleverMonkey.com made some wonderful space story stones. Kids use these to create their own scenarios about astronauts, aliens, planets, rockets, asteroids, satellites, stars, etc. 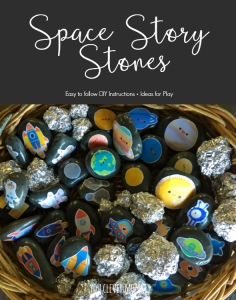 During pretend play, kids can play by themselves or with others. Besides thinking and physical skills, social and emotional skills are also involved. For so many aspects of development, pretend play is a vital component. As children play, whatever they imagine helps them make sense of the world around them. Is your child ready to blast off for some space pretend play?

Interest in space is universal (chuckle, chuckle) and space math activities and games are fun ways to explore the universe of numbers. We count the ways… Somewhere, young kids discover they can say a string of numbers, make explosive noises, and blast off in all directions at top speed. Arms together above head is optional. … END_OF_DOCUMENT_TOKEN_TO_BE_REPLACED

The possibilities for space art activities are like space: endless. From simple to complex, easy to challenging, there are ones to appeal to all kids. What shape are planets? As far as we know, they are round. In pictures, planets are circles. A very special kind of paper is circles and it’s found right in … END_OF_DOCUMENT_TOKEN_TO_BE_REPLACED

Today’s space playdough activities are inspired by the journey of the probe Juno to the giant planet Jupiter. Will Juno discover any aliens? What else is on Jupiter? Kids can make their own aliens and planets with play dough. For some hands-on fun, play dough is a remarkable and inexpensive toy. Either purchased at a … END_OF_DOCUMENT_TOKEN_TO_BE_REPLACED

Zoom, zoom, zoom, we’re going to…sing some children’s space songs and do the actions too. This is a great way to have fun while learning. Ready? Blast off! Zoom, Zoom, Zoom, We’re Going to the Moon is a well-known space song for kids. There are a few variations and most of the time, the countdown … END_OF_DOCUMENT_TOKEN_TO_BE_REPLACED

Children’s space books are almost as numerous as the stars in the sky! Space is a really popular theme for children’s books. There are wonderful picture books about space with amazing photographs and illustrations. National Geographic Little Kids First Big Book of Space by Catherine Hughes and David Aguilar is one of these. It answers … END_OF_DOCUMENT_TOKEN_TO_BE_REPLACED

The arrival of the space probe Juno to Jupiter is tremendously exciting. How about another planet? Kids can play and connect to Earth’s nature. This week some special instruments were turned on, including Juno’s eyes. For today’s space activity, pretend to turn on your child’s eyes. Go outside and check what those eyes see on … END_OF_DOCUMENT_TOKEN_TO_BE_REPLACED

Did you hear that 3 Lego characters traveled all the way to Jupiter? Their adventures inspire some Lego space play for today’s play-of-the-day. Three Lego figurines, made of special aluminum and tested for space, finally made it to Jupiter. Their journey has been 5 years and 1.7 billion miles long. While the Lego people that … END_OF_DOCUMENT_TOKEN_TO_BE_REPLACED