Books are important to share with children for more than just reading. Stories put clothes on bare words, unlike the emperor in the Emperor’s New Clothes. 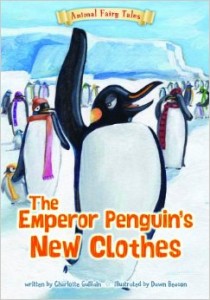 In this story, the emperor wanted to impress everyone by wearing magnificent and expensive clothing. Two clever tailors brought him some fabulous and pricey fabric so special that it could only be seen by those who were intelligent. The emperor couldn’t see it but didn’t want to appear stupid so admired it and ordered a new suit to be made with it. Of course, all those around him claimed to be able to see it too. The tailors proceeded to work on the invisible fabric which didn’t really exist at all. Who would admit they couldn’t see it?

The emperor made matters worse by marching in a parade in his new suit. A small child loudly asked, “Why is the emperor wearing no clothes?” The emperor felt very silly and quite exposed, especially if it’s an emperor penguin, like this version by Charlotte Guillan.

An underlying assumption in this story that clothes can give us information about someone. This is one of the reasons why children use clothes and costumes in their play. Kids love to be superheroes and ask for a cape. This can be a scarf, a towel, or even a large t-shirt but some article is a requirement. Wee little ones will try on mommy’s or daddy’s shoes as if they are trying out how being a mommy or daddy feels. 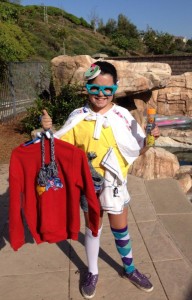 Princesses wear a crown and pirates need an eye-patch and a sword. Fairies want wings and magicians must have magic wands. Kids will combine clothes in unique ways as they seek to figure out different roles and people. With a few dress-up clothes they can be anyone they imagine.

For a play-of-the-day, do you have some dress-up clothes your child can use? Boys as well as girls will dress up. Add in some other items like shoes, a purse or briefcase, or jewellery. You may have a long cardboard tube for a sword. Hats are also useful.

Playing dress-up is fun for kids—and adults. Costumes is a category in the Oscars and a critical factor in shows and movies. Does your child like to play dress-up?