Have you heard the expression it’s the little things that count? It’s also the simple things, like one-to-one matching for some dragon math fun. Sometimes, this is also called one-to-one correspondence. Surprisingly, math includes relationships. 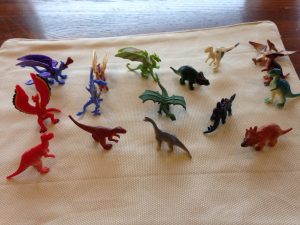 For this activity, we used some small plastic dragons along with some dinosaur friends. We had a container of treasure too, an assortment of flat marbles, play coins, buttons, and pretend jewels. To start the math fun, each dragon or dinosaur needed one treasure. Little Sister picked out just the right piece of treasure for each character.

Obviously, this isn’t hard to do but it’s very important. The foundation of math is that each number means one item. Three is not just one number, it’s really three of them, as in 1 and 2 and 3. As we say each of those, it’s matched up with an object. This concept is something the brain needs to figure out and giving kids opportunities to match 1 number to 1 thing is helpful. 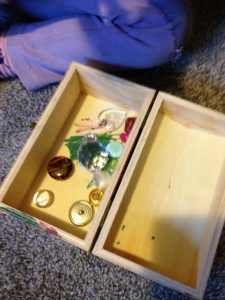 Another way to have some 1 to 1 dragon math fun is to use an egg carton or muffin tin. Each space is like a dragon’s mail box or bank. Kids can put 1 bit of treasure in each space, but only one. They can walk a dragon (or dinosaur) over to get out the treasure. No dragon can have more than one.

This activity is mostly for younger toddlers. Some older ones may have already made the brain connection for one number and one item. You can make the activity more challenging by having your child give two treasures to each dragon or dinosaur, or if there is enough, three pieces. This is the beginning of multiplication and it happened while playing. 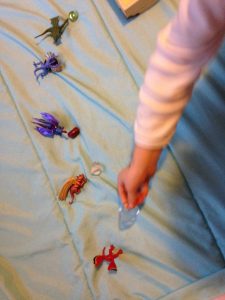 Playing with numbers and math gives your child a tremendous advantage. Have you ever wished you were more comfortable with math? We can make that happen for kids by including math play in their day. This was such a little and simple activity but it creates critical early math skills. How do you support your child’s math play?