Mrs. A is having a short recess while the family makes a move. She wants you to know she is Not in detention and will be back when the bell goes. 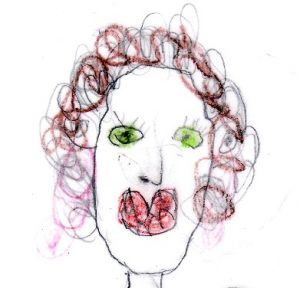 Kids have been enjoying dress up and costume play (cosplay) for generations but Halloween pretend play is certainly special. Everyone else plays too! 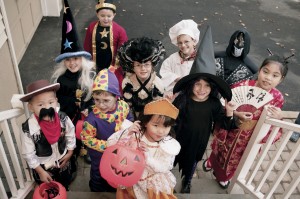 While cosplay generally means putting on the costume as well as the words and actions of a specific character, kids add their own interpretations. A costume, or any dress-up play, invites explorations. Kids are exploring different ways of behaving and interacting.

If we look at the word from a child’s perspective, they see many different people from the outside. They can only guess what that feels like on the inside. So kids try-on the character of the boss, the bad guy, the rescuer, the leader, the worker, the store clerk, the superhero, the sports player, and others each time they try on a costume. Many times, they don’t even need the costumes. They can do all this with imagination.

Although pretend and imaginative play doesn’t need props, dressing up is a sort of permission. Kids know they are people, not cats or dogs, but ears and a tail mean they can try and eat off a dish on the floor. Normally, kids know if they ask adults if they can do this we’d say no, but they explain they are pretending to be a kitty or puppy and what happens? There’s a good chance we say yes. Would we let kids growl at us and order us around? Not usually, but if they are a lion or a pirate, we play along. No doubt about it, imaginative play is pretty powerful.

Pretend play starts about the age of two and becomes increasingly more complex. It’s a vital part of children’s development, creating new brain connections and understandings. On a mental level, problem-solving, creativity, organizing, comparing, and other thinking skills are involved. There’s an emotional aspect, too. Have you heard the expression about not judging others until we have walked a mile in their shoes? When kids dress-up they are trying to do just that. This is part of empathy, of feeling how others might feel. Physically, brains and bodies are so linked that imagining an action creates a response in the body. 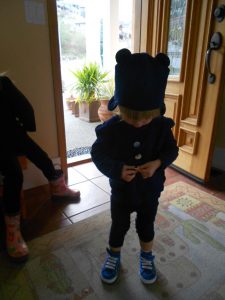 Halloween pretend play will happen long before and long after Halloween. And not just for kids. Will you dress up too?

Listening to a podcast this week on brains and learning explained why kids need space and time to play and why it’s so important we make sure they get it.

The brain scientist was discussing the value of small, repetitive actions that make up part of every adult’s day. These actions vary depending on what type of job we do and what pastimes we enjoy. Ones like painting buildings, doing dishes, swimming lengths, knitting, or even driving. Have you ever driven for a period of time and then realized you couldn’t really remember the past few minutes? That’s because the volume has been turned way down in part of the brain, allowing the volume to get turned up in other parts of the brain. 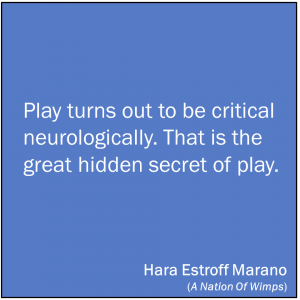 During repetitive play, the same thing happens for kids. Part of the brain turns to low leaving space and time for brain to consolidate learning. We’ve all seen kids play in repetitive ways. Like digging and dumping over and over, rolling and patting play dough, pouring water out of a container and filling it up again and again.

Both adults and kids need space and time to play –and work. Children’s play really is their work. The brain has over 100 billion neurons or nerve cells. These connect with each other in countless ways. As children play, the brain is on the job.

As parents and caregivers, we want what’s best for kids and for them to have as many opportunities and experiences as possible. It’s hard to step aside and let kids engage in ordinary, everyday play. We can be assured though, this is what they really need. The more we learn about the brain, the more we appreciate the role of play in learning. Is there space and time in your child’s day to play? How do you support play?

How can stuff in the recycling basket or box be more appealing than toys? Somehow, kids will play with anything including play with recycled materials. Boxes, plastic containers, paper, cardboard rolls, cotton stuffing, coffee cups, foil pie tins, empty cartons, styrofoam trays, corks, and many other things are all treasures for kids and play. The … END_OF_DOCUMENT_TOKEN_TO_BE_REPLACED

While the Star Wars movie had great pictures of the sky, there is nothing like the real thing so explore the night sky with kids.  At this time of year, it’s dark before bedtime so this is very doable. Dress for the weather and spend a few minutes star gazing with children. Just like the … END_OF_DOCUMENT_TOKEN_TO_BE_REPLACED

Yes, learning to print numbers can be lots of fun! Here are 10 fun ways kids can learn to print numbers. These will entice even reluctant kids. 1. Printing numbers doesn’t need pens and papers. Little Sister is making some numbers in a bowl of sand. First, the sand needed to be mixed up, then … END_OF_DOCUMENT_TOKEN_TO_BE_REPLACED

Saving money is often on lists of new year’s resolutions for grownups but it can also be there for young children, even before kids start school. In the humorous words of Liz Pulliam Weston in her article about money and preschoolers, “children are ready to learn about money as soon as they’re old enough not … END_OF_DOCUMENT_TOKEN_TO_BE_REPLACED