Puzzles are more than toys. They are a great opportunity for kids to develop critical thinking skills. Combine two kinds of fun with dinosaur puzzles. 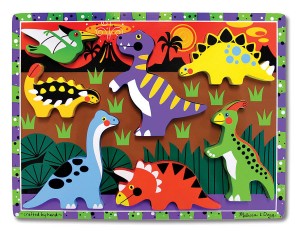 There’s a tremendous range of dinosaur puzzles, from wooden or sponge ones with only a few big, chunky dinos that fit in precut spaces all the way to big floor puzzles with 100 or more pieces. Some dinosaur puzzles will have the alphabet or numbers printed on the pieces too. 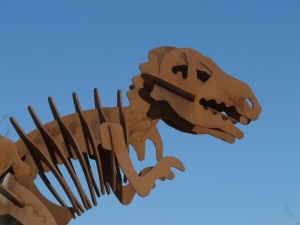 Practically any kind of dinosaur has a model of wooden bones to put together like a small version of real skeletons in museums. Few pieces or many, brightly colored or plain, 3-d or flat, there are dinosaur puzzles that will appeal to kids of various ages and stages.

Kids will play with puzzles in different ways and use different strategies to put them together. As they do, here are a few of the ways that puzzles build brain connections: 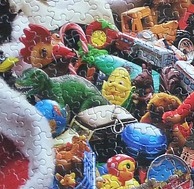 Puzzles can also enhance social and emotional skills. Sometimes kids will ask for help and sometimes they will be very independent. They will become frustrated and have to handle their emotions. Showing a puzzle that is all done and telling about it builds people connections. In a way, a puzzle is a metaphor for life. Aren’t we all putting the pieces together each day?

P.S. If play and early learning is a puzzle for you, visit often for a play-of-the-day post everyday.

The authors of Dinovember have a new version of their book with more photos. Pretend play with dinosaurs can be constantly new and different, yet based on timeless play and prehistoric creatures. 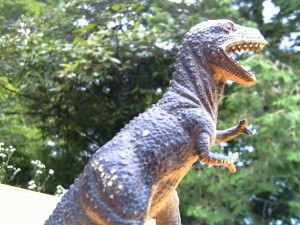 Dinosaurs may have lived more than 60-million years ago but to kids, they can be as new as today’s play. Although the dinosaurs all died off long ago, they live in children’s imagination. In the words of Carl Sagan, “Imagination will often carry us to worlds that never were, but without it we go nowhere.” Imagination is amazingly timeless and alive with possibilities.

As children pretend, both minds and bodies are engaged. Just thinking about going up in an elevator is enough to make eye muscles respond and go up too. However, as kids are involved in pretend play they are usually very active and bodies fly, bend, twist, stomp and more. Brains are very active, creating new pathways and connections, figuring out relationships and interactions.

Kids don’t necessarily need any dinosaurs for dinosaur pretend play. They can just be. However, there are inexpensive plastic dinosaurs small enough to fit in a child’s hand or as big enough to ride in a playground. Putting a whole bunch of tiny blocks together can make a huge dino sculpture. This Lego one was made as adults played.

A dinosaur tail is quick and easy to sew. Stuff it with light weight material so it’s not too heavy as kids play. These dino feet are also very simple; they are two tissue boxes covered with green paper and white teeth. They are somewhat slippery tho as kids take big dinosaur steps. A headband takes almost no time to make but can give kids hours of fun.

Usually, as kids play, they make up their own stories to go along with what they are doing. If the “dinosaurs” seem stuck on eating each other up, you can ask if they would like to have an adventure, such as making a dino blanket fort, or exploring the jungle. Whatever they do, aren’t kids and dinosaurs are a great combination for play?

Today’s play-of-the-day is Dinovember patterns and patterning skills. These are great ways to have fun and develop some smart brain strategies. 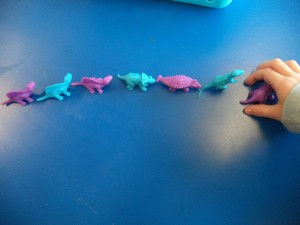 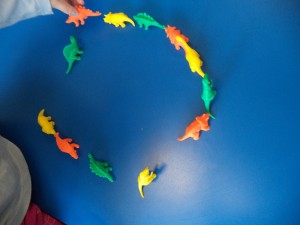 When kids have figure out how a pattern works, they can continue patterns in long lines or even circles. But this takes lots of experiences and exposure to patterns. Older kids and those who get the idea may make more complicated patterns using a group of 3 objects, then 4 and more as well as with sizes and other aspects.

Patterns do not have to be only dinosaurs. Another series could be dinosaur/block, dinosaur block. This is useful when the dinosaur toys are all a similar color. Or maybe car/dinosaur, car dinosaur.

The skill of recognizing patterns may not seem important but language and math are based on patterns. So is Nature and for that matter, our nature too. According to Matt Powers, “Out of all mental skills, pattern recognition is said to have the highest correlation to intelligence.”

Patterns aren’t just for kids. Think of the stock market. Successful traders looks for patterns and trends. So do big companies. From weather forecasters to plant scientists, psychologists to engineers, we all depend on patterns. Patterns are key because they contain information about relationships and connections, helping to understand the world around us. Playing with dinosaurs and other toys, can support the development of patterning skills. Will some dino play be part of the pattern in your child’s day?

Dinosaurs likely didn’t sing, but here are some simple and easy dinosaur songs for children. These use tunes that are already well known. Does singing happen at your house? Not on a machine or device but with family voices. It needs to because songs “aid a child’s ability to think” according to Sally Goddard Blythe. … END_OF_DOCUMENT_TOKEN_TO_BE_REPLACED

Playing with dinosaurs and construction toys was a popular play-of-the-day during Dinovember last year. Here is the blog post to inspire more fun this year: Dinosaur Play and Construction Toys Because kids never see real live dinosaurs now, they are not limited in any way as to how they play with them. Dinosaurs are almost … END_OF_DOCUMENT_TOKEN_TO_BE_REPLACED

Dinosaurs walked the earth. We have evidence. Kids can also go on a nature neighborhood walk. They won’t find evidence of dinosaurs, but can still discover. Neighborhoods have lots to explore, even in urban areas. At this time of year, kids will likely find leaves. We noticed a giant one on top of the path. … END_OF_DOCUMENT_TOKEN_TO_BE_REPLACED

Sensory play is one of the ways the brain uses to load information into its circuits. Dinosaurs, letters, and sand combine for some awesome sensory play. Not all children are particularly interested in letters, but dinosaurs and sand can turn learning into fun. While a whole sand box or sand table is wonderful, a bowl … END_OF_DOCUMENT_TOKEN_TO_BE_REPLACED

Do you know about dinovember, books, and kids? I just discovered it last year and loved the idea.  This explanation is from a blog last November: Dinovember is the idea of parents Refe and Susan Tuma who wanted to hold onto the magic and wonder of childhood for their children for a little longer. The … END_OF_DOCUMENT_TOKEN_TO_BE_REPLACED

Number sense develops as children play with and experience numbers. Counting dinosaurs is an appealing and fun activity for young children. Dollar stores often have inexpensive bags with an assortment of dinosaurs. These can be used for counting and other fun. Kids just learning to count may not have all the names for the numbers … END_OF_DOCUMENT_TOKEN_TO_BE_REPLACED

It’s Dinovember! Time for some dinosaur fun activities, like this quick dinosaur headband craft. Complete with scary teeth, kids can wear this as they play. To make this headband, kid hands or grownup hands can cut a long band of green paper, enough to go around the child’s head. Stiff paper will be harder to … END_OF_DOCUMENT_TOKEN_TO_BE_REPLACED