Kids like to make something special for their moms and here’s a suggestion for one to build—Mother’s Day Lego flowers. Made by hand with lots of love.

A friend’s son made this for her, which she treated like any other flower and put in a vase. Without the water, of course. This flower means more to her than a dozen of the most expensive roses. What a sweet idea that he came up with all by himself and then made. Making something himself that was so appreciated boasts his self-esteem and strengthens the bond between them. It quite likely even made up for times when his mom accidentally stepped on piece and experienced that sharp pain unique to Lego and Duplo that parents and caregivers can remember forever.

Not only was this flower imaginative, it was also engineered. Kids may want to make a flower for mom out of paper, play dough, recycled or other materials. The paper one in this photo is 3 different flower shapes on various colors of paper all stacked together. Fold a pipe cleaner in half and make two tiny holes in the center. Kids can poke the pipe cleaner in the two holes in the center and twist together for a stem. 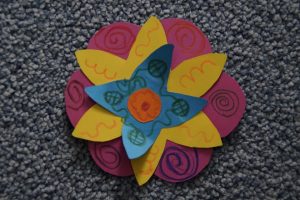 If kids would like to try making Duplo flowers, an easy one is a tulip, with step-by-step instructions and images. This one I might even be able to manage.

Another idea is to make a vase to hold a glass for real flowers. Start with a base and kids add blocks around the edge, leaving a space in the middle. Set a plastic glass inside, add water and flowers. Make sure to pick up the holder by the bottom base for moving it because the water makes the vase heavy!

Whatever kids build, Mother’s Day Lego flowers, or some other creation, it will be a gift from the heart.

It’s an interesting question: Does children’s play influence career choices? Or, do interests already present in childhood influence how kids play? Like the chicken or the egg, which comes first? 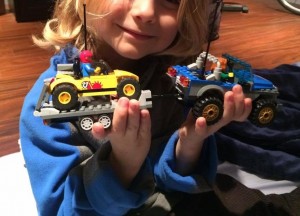 In this series of posts on ways children play, several parents are contributing descriptions of how their child plays. One preschool boy is really into pirates, another loves playing in his kitchen. Jumping on a trampoline both inside and outside is a favorite way to play for another child, and one 2-year old girl is beginning to pretend play, either as the baby or the mommy.

A dad sent in this look at how his son plays, “K usually likes to play by himself. He loves Lego and anything related to cars or monster trucks. Occasionally, he will play with pillows, kitchen tools or make stuff out of the recycle bin.”

K’s dad isn’t an architect, but he does have lots of building projects, like furniture, home renovations, and play structures in the backyard. It’s no surprise that K likes “making stuff” too.

Many kids all over the world, girls as well as boys, love to play with Lego. According to an article on the Lego site, “99% of architects played with LEGO bricks.” (More Than Child’s Play: Favorite Toys Can Provide Clues to Future Career Choice)

Jeremy Pelletier is an architect and he didn’t just play with Lego as a child, he still plays with it now. On a recent television interview, he confessed that the estimate of a quarter million bricks is low. There could be double that now. He says that Lego was one of his favorite toys and “probably, one of the reasons that I’m an architect today.” He hopes that his kids will also love Lego, but he’ll be okay if they don’t.

Even if kids haven’t seen the movie, Star Wars shows up in their play. For a play-of-the-day, young kids might like some Lego and blocks star play. Children do not need to have the special kits and other toys to have fun. We can let them play with what they have available. Imaginations will often figure out substitutes. 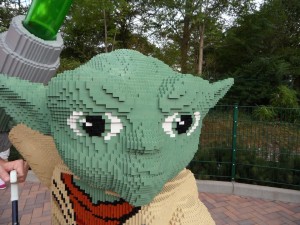 Construction toys are definitely hands-on, but brains are as busy as hands. We don’t have Superman’s x-ray vision but if we could see the activity in the brain we’d notice that kids are making a tremendous number of neural connections. Both brains and hands are needed to stack, balance, and make rows and lines. Children may have a picture in their memory banks of how space vehicles look and try to recreate them. This will involve a lot of trying and comparing what they have constructed to what they remember or visualize. Unlike Yoda’s words, “There is no try,” kids will try constantly. Hands, brains, and eyes are all trying to coordinate their actions.

As grownups, we often try and see if something will fit in a space. For kids, spatial awareness and manipulation develops from the trying. This is also called play and kids will explore where blocks and toys will go. Eyes can measure a space but only trying will confirm if something fits or not. Matching sizes and shapes are skills needed for math and science, even if Yoda says, “Size matters not.” 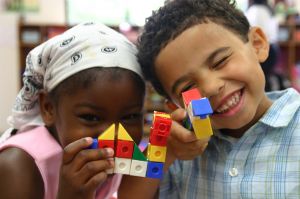 Brains are also organizing, planning, and solving problems when kids play with blocks, Lego, and other construction materials. These are critical skills for all kinds of learning. Besides construction toys, there may be some out-of-this- world treasures in the recycling or craft junk, such as plastic containers, cereal boxes, etc. Imagining and creating are the heart of innovation.

Lego and blocks star play appeals to kids of various ages, both boys and girls. Although we can’t see how active it is during play, wouldn’t you agree with Yoda, “Truly wonderful the mind of a child is?”

Two astonishing events in the news really underscore the influence of toys: a huge show of retro and modern toys, and a Lego professorship at Cambridge. Do you have any toys from your childhood? At a show this month, called Retro and Relevant, over 700 adults will be sharing tables of Star Wars, Transformers, Ninjas, … END_OF_DOCUMENT_TOKEN_TO_BE_REPLACED

Besides a bin full of learning and fun, thinking skills, kindergarten readiness, and more, Lego and Duplo are great for building memories. Just think for a minute about what you remember building with them. Did you have some favorite creations? Were there some bricks that you were always looking for because there were never enough … END_OF_DOCUMENT_TOKEN_TO_BE_REPLACED

When we think of doing art projects with kids, we think of using paint, paper, glue, playdough and other materials, but Lego and Duplo? Yes, kids can do amazing art with Lego bricks that adds another dimension to learning, fun, and kindergarten readiness. Has your child tried Lego art? Have you? When Little Sister went … END_OF_DOCUMENT_TOKEN_TO_BE_REPLACED