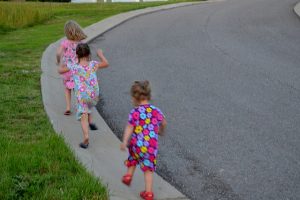 Fall and Halloween weather may mean some indoor days but there are still ways for young children to have some gross motor movement fun. Ways that are easy on furniture and bodies.

Gross motor means movement activities that use the large muscles of the body like running, skipping, hopping, running, rolling, slithering, and more running. Sometimes I think hallways in a house could more accurately be called runways. However kids move, they need physical activities not just for their bodies but their brains too. Movement wires the brain for math and language by creating neural pathways and connections. 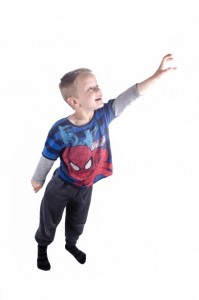 What are some ways that kids can move indoors? If kids have experienced strong winds outside that blow leaves all around, they can make the wind noise and swirl around in a hallway or other safe space. Parents and caregivers can add an occasional commentary such as, “The leaves are flying all around.” Make a few windy, gusty sounds too because it can be nice to have an appreciative audience. Kids tend to move in short, vigorous bursts so after a few minutes of this, they might need a quick break. Perhaps, the leaves could be resting on the ground.

Some other ideas for movement fun could be creeping around like a ghost that barely makes a sound, flying around like a witch on a broomstick, stomping like a monster (maybe that one is not so great for apartments and people below), whirring like a robot, using huge steps like a dinosaur, shaking like a skeleton, or swooping like an owl. 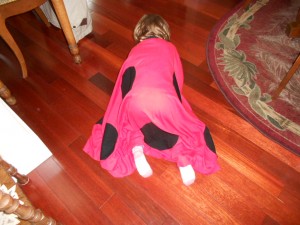 Because there are so many costumes, kids could also hop like bunnies, flit like butterflies, and crawl like ladybugs. Kids will have their own suggestions for how they want to move in a space. Save a few strategies such as being an old, slow turtle or sitting still like a pumpkin for moments when calm and quiet are needed.

Big muscle activities are vital for children’s development. Is there space and time in your child’s day for some gross motor movement fun? 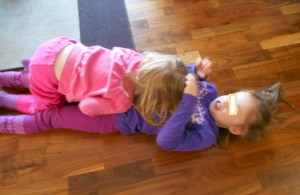 Not as controversial as weapons play, big body or rough and tumble play is often discouraged by parents, especially in the house. The wrestling, jumping, chasing, tumbling, racing, rolling and other play can get pretty loud even in a big place. But, little bodies seem to play like this naturally and it’s part of early learning and healthy development.

Rough-housing is more common with dads than with moms. Mariana Brussoni from the Department of Pediatrics at UBC explains why this is so and why this play is so important, despite the risks:

“…I consider risky play an injury prevention strategy. Risky play, including roughhousing, provides children with important developmental and physical benefits. Children who have the opportunity to engage with risks in a secure setting with minimal hazards and appropriate supervision learn lessons that will serve them in good stead when they encounter risks in the “real” world.”

“…Compared to mothers, fathers spend a larger percentage of their time playing with their children. Men’s approach to caring involves doing activities together and taking kids out to play.”

Besides parents or other adults, brothers and sisters are often included. While some children, both boys and girls, seem to crave this sort of play, others are not as interested. Engaging in big body play stimulates social and emotional learning as well as language and communication. During rough play, children learn to listen and watch others for clues so they can play without hurting. Kids practice problem solving and other creative thinking skills. All of these are important for early learning and for interacting.

Of course, rowdy play needs careful supervision by adults and some reasonable rules for safety, such as no means no and making sure the space is clear. Sometimes, a time limit is helpful. How do you handle big body play at your house?

I just discovered this tremendous resource of videos about early childhood, done by Jeff A. Johnson at Explorations Early Learning, and listened to a recent discussion on children and Weapons Play. Like many, many people I feel really uncomfortable about this kind of play. Jeff suggested that it is okay to let kids know our … END_OF_DOCUMENT_TOKEN_TO_BE_REPLACED

In doing this month’s series of blog posts on brain development and kindergarten readiness, I learned that we have more than 5 senses. Apparently, we have 7. In addition to taste, touch, smell, sight and hearing we have the sense of movement and of our body position in space. In a way, would that mean … END_OF_DOCUMENT_TOKEN_TO_BE_REPLACED

The calendar says today is the first day of spring although the sun crossed the equator yesterday; that gave me the idea for today’s kindergarten readiness activity. The Equator is the mid-line of the planet. Our bodies have an imaginary mid-line too but it goes from the top of the head to the nose, tummy button … END_OF_DOCUMENT_TOKEN_TO_BE_REPLACED

St. Patrick’s Day means that it’s almost spring. Kids seem to be made of them — springs , that is — at this time of the year. Days are certainly longer especially with the time change, but are not always warm enough or dry enough to be outside. And all that energy needs to move. Here’s a … END_OF_DOCUMENT_TOKEN_TO_BE_REPLACED

With colder weather comes more inside the house days than outside ones. Does your little one need to wear off some pent-up energy? Physical play  is essential to both children’s healthy development and their learning. It’s easy to understand how physical play contributes to physical development and gross motor (muscle) coordination. But this kind of … END_OF_DOCUMENT_TOKEN_TO_BE_REPLACED

Easter bunnies don’t only have to hop. For some Easter fun, kids can try different ways to move. (Doing this along with the kids is great exercise for adults, too. ) Start with a hop on 2 feet. Next, try a hop on 1 foot and then the other. The Easter bunny may need to jump. Jump on … END_OF_DOCUMENT_TOKEN_TO_BE_REPLACED

Speaking of spring….Kids always seem to have extra energy. Here’s a way to put it to good use and promote physical development and kindergarten readiness. Find a safe place for lots of moving. What are some different ways to move? Spring, jump, leap, walk, run, roll, crawl, hop, slither, dance, twirling, twisting, etc. Big muscles … END_OF_DOCUMENT_TOKEN_TO_BE_REPLACED